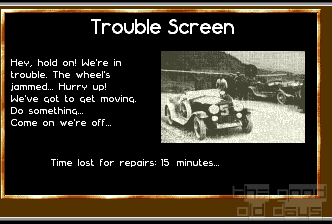 Oh, yes… back in the days, car racing was much more adventurous, wasn't it? Real gentlemen crossing whole countries with just their co-drivers and who weren't afraid to get their own hands dirty. After all, pit stop mechanics trained to fix everything within seconds didn't exist, and so didn't pit stop babes, for that matter. 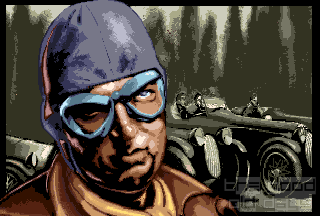 So far, so good

1000 Miglia attempts to communicate such romanticism to its players. Apparently inspired by a real annual race across Italy, the player is supposed to make it all the way without major breakdowns. For each leg, it is less about achieving the perfect time, but rather about arriving at all.

So right after the rather irrelevant selection of driver and car combo, we're chugging along the partially paved country roads at leisure speed. My droopy reflexes are rather happy with this. There is even time to stare back at the cows watching from the side of the roads. At least on a regular A500. Sloppy programming makes speed scale badly on faster CPUs, making the races unplayable.

1000 Miglia's specialty shows itself rather quickly. The cars of the time were anything but reliable. With rather high frequency, one or another component will break. Wheels, a piston… this is where the driver's mechanic skill comes into play, determining the time to fix, but also the availability of replacement parts. Those can be stored in the trunk before each leg. Just that space is limited and what to take along is just a wild, totally random guess, because who knows what kind of accident or failure will happen? 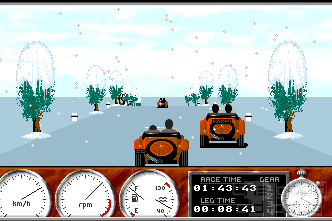 At least there is no causal link discernable between driving style and accidents. Collision detection exists, but crashing into trees, people, houses or other cars will only cause you to lose time. They never lead to real accidents. Those occur even when peacefully driving along the middle of the road. Speaking of other cars, they are always present while driving, but they all look exactly the same and there is no link with competing drivers. They are just random obstacles.

Apart from that, the game offers the regular genre standard of the time. Courses don't stick in mind due to their design (curves, hills, obstacles). Graphics vary lightly, but mostly just based on changes in colour palette. Neither snow, nor rain or darkness have any impact on the driving, their effects remain purely visual.

What remains is therefore a rather boring racing game, which for sure had a good intention, but it hasn't been really coherently designed and implemented. But at least it's the first in the alphabet.