The Sacred Armour of Antiriad
for Amstrad CPC 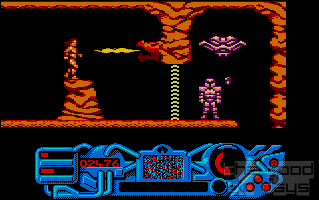 The radiation suit stands still and silent in the forest. Not even the oldest members of a post-apocalyptic humanity, which has remained at a kind of stone age stage development, know why it is there. Only an instruction manual has been handed down and is supposed to be the spark of hope in the valley of slavery for the spearhead of the underground freedom movement. For the tyranny of the alien invaders is centrally controlled from within a nuclear-irradiated volcano. Access can therefore only be gained with the appropriate armor: the Sacred Armor of Antiriad!

I could jump out of my skin!

The way there leads through the dangerous forest guarded by aliens and the only weapon of the chosen one named Tal is his own arm's strength paired with the destructive power of a thrown stone. The sound effect when the stone hits the futuristic-looking flying saucers is appropriately funny: stone hits metal. However, usually two hits are enough and the UFO disappears from the forest. There are also warning robots on the way, which trigger a shrill alarm signal when entering the screen. If Tal takes care of the flying sirens quickly enough, he is spared the approaching patrol. The opponents partly follow fixed paths on the screen in a very robotic way. They only rarely approach them specifically. Therefore, Tal can avoid most attackers or throw them from a safe distance by cleverly choosing his path. A touch consumes the limited stamina of the hero and ultimately leads to the loss of one of three lives after complete exhaustion.

Only the radiation suit can recharge Tal's life energy, but it is in turn vulnerable to the outside. The energy is restored as needed by collecting batteries. Otherwise, the suit designed to float will sink powerless to the ground and release its owner into the heavily irradiated areas inside the volcano. In fact, Tal has to intentionally leave his protective shell during the game in order to pass through otherwise impassable barriers. Behind these barriers, the necessary upgrades for the armor are usually hidden: anti-gravitation boots, the Pulsar laser and the implosion mine for destroying the alien facility. These additional modules are displayed in the lower part of the screen together with other environmental information such as radiation and energy status.

The total area is divided into sections and you start in the forest. A special feature is that the game randomly decides over one of 2 starting points at the beginning. Above the forest is a cave system that is mainly only accessible with the hovering suit. In the sections located even further up, in addition to the known enemies, fire-breathing dragon heads that fit well with the hellishly red-colored environment are added. The last screens are so highly radiated that Tal is no longer recommended to leave the suit. The detonation of the bomb placed at the highest point completely blows away the enemy alien environment. Only the radiation suit with the new hero of humanity is seen at the end of the game. 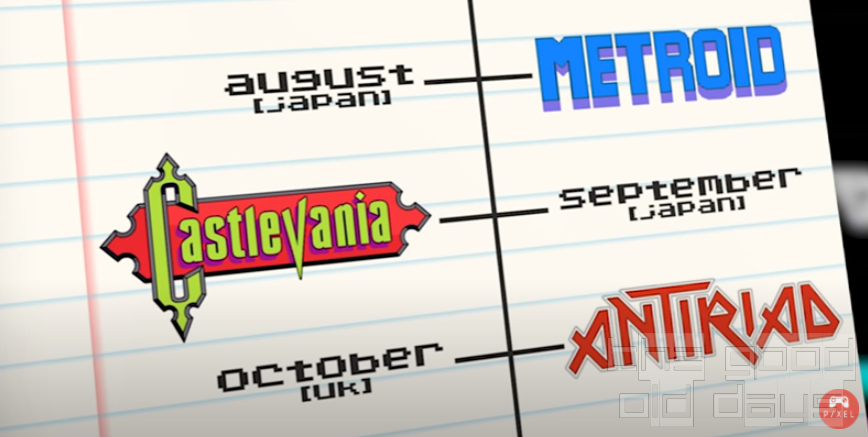 What is noticeable about this jump'n'run from 1986 is the purposeful employment of additional game elements, whose use requires further progress in certain situations and therefore forces backtracking of the level in some places. Only one or two months earlier, a similar development of the jump'n'run genre was released in Japan with the games Metroid and Castlevania, which shaped the term Metroidvania.

Dan Malone created the very impressive 16-page comic book with the background story that came with the game. Later, he was mainly involved in visual aspects of today's perhaps more famous games such as Chaos Engine. The in-game graphics were revolutionary, especially in view of the very early development of the game. The mane of the long-haired muscular hero flutters in the wind and the strange UFOs in the familiar surroundings of a forest or cave bring the contrast between the future and the past very impressively to the screen. The title page with the memorable logo “Antiriad” also goes to his account. Its design is reminiscent of the logo of the legendary metal band Iron Maiden. 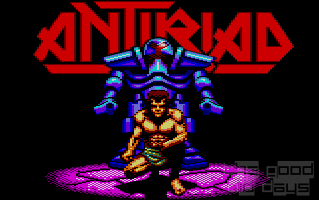 The high-quality game was refined by the aforementioned sound effects and received a really impressive title melody, which counts among the best pieces on the system in the C64 version.

Of course, there are also some flaws. Firstly, Tal moves too slowly forward, which is particularly noticeable in jumps that appear to be in slow motion. Therefore, the gameplay is more strategic: you plan your jumps and paths in advance, because you do not avoid the enemy by reacting quickly, but by skillfully exploiting its predefined paths. The controls are also somewhat imprecise, which is especially noticeable when trying to jump directly from a standing position.

Furthermore in some situations the enemy cannot be avoided or eliminated cleanly. Then, collisions are indeed unavoidable and virtually predetermined. So you simply have to build up enough stamina at these points to survive.

In this respect, the playability is not really to the spot which is a decisive aspect for the overall evaluation. Despite the impressive presentation, the player will be standing alone and frustrated in the forest, as an average player will not get much further due to the high level of difficulty. This is particularly negative because in Nintendo's Metroid and Castlevania, it was not the clunky controls, but mainly the challenging game design that made the high demands on the player.

LostInSpace:
Feel free to share anything about The Sacred Armour of Antiriad here!
[Reply] 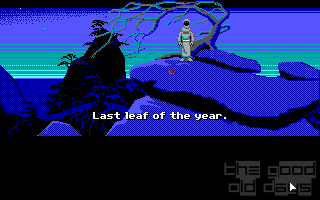