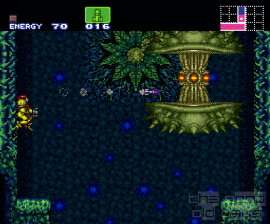 At first: this game is no remake of the NES classic “Metroid”. It is true that it takes place at the same locations especially at the beginning, but it is several years later than part 1 and 2.

The story is shown in a nice intro: Mother Brain, the leader of space pirates who wanted to bring chaos to universe with her mean, blood-sucking aliens, has been destroyed by the mercenary Samus Aran (YES! A female main character!). Of course Samus manages it and returns to crush the Metroids on their home planet. This happens in part 2, which was released for the Game Boy. After the Metroid queen has been destroyed, Samus finds a Metroid larva that she takes with her for science purposes. On a research base scientists discover the unbelievable high energy produced by the Metroids which could possibly solve mankind's energy shortage. Short time after she has left the laboratory, Samus hears a cry for help from there and she hurries back.

From here on the player takes control. Now you have to establish the death of all scientists (REALLY, a Nintendo game with dead men!) and find the container with the Metroid larva have been opened violently. When exploring the base further you find the Metroid caught by the enemy out of part 1, Ridley, who was supposed to be dead. After a hard struggle, Samus is wounded and Ridley escapes when the self-destruction of the base is activated. Samus flees and pursues Ridley to the planet where everything had begun…

The game itself is a 2d action game that is dominated by quite entertaining jump'n'run passages. Nevertheless it is also the only grave disadvantage of the game. When you are on your way to a new area of the planet and have to proceed step for step, from platform to platform through the same screens for the 10th time, it is not fun anymore. But it is worth it for the really nice and creative sections of the game.

At the beginning you are just equipped with an armor suit and an common gun, but this changes quickly. On your arrival you find the “Morphing Ball” that allows you to transform to a small ball and roll through narrow gaps. Later, this way of moving forward is completed with special functions, for example the ability to jump as a ball and planting bombs.

During the game progress the gun becomes improvable with ice bullets, numerous lasers and a reload function. The best thing is combining most of the weapons. Furthermore there are several special weapons like rockets and smartbombs that are limited in contrast with common arms. These special weapons are very important as they help you to open certain doors and marked wall pieces. Moreover, new elevators, essentially necessary to access particular areas, can be found, for example a lava stage. Samus can also make use of several special techniques like pushing off from the wall or running VERY (!) fast by means of certain boots.

The dimensions of the entire game are relatively large. There are many very nice and creative areas to discover, for example stages made of lava, overgrown with strange plants, a destroyed and partially flooded undersea base as well as a crashed space arc of an extincted alien race. The level design is very pleasant and above all there are uncountable secrets to discover.

The enemies appear in reasonable amounts and they are relatively diverse. Later in the game you primarily meet stronger clones of the known enemies. Kindly they leave power-ups for your advantage only: you will not find any life energy if it is full already but you are short of rockets.

The final enemy bosses are a hard piece of work. They consist of striking opulent graphics and are extremely hard to beat, especially in the middle and the end of the game, but you can defeat them with some skill. Here the developers have been really creative, one of the level bosses is 2 (!) screens tall for instance. Only the last of them is easy to defeat…

In conclusion I have to say, that this game, which took me many nights to play, is a real top game!

Moebius:
Looks a lot like Turrican.
Patrick Eymann:
The best Game I ever played on SNes
Adrian Gebert:
Let`s rock
Masi:
I played this game not long ago again. And I'm still excited by defeting Mother Brain.
Yeahh right!:
When I played the Game i got shot in another World!! It's great!
Little Boy:
Feel free to share anything about Super Metroid (1994) here!
[Reply] 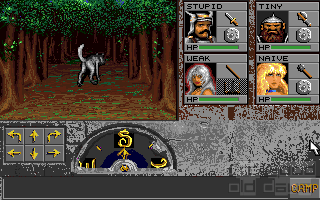