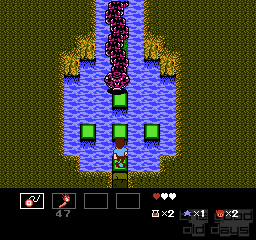 Feeling curious for it's Zelda-like fame I wanted to try this game, as I usually like that kind of action-adventure (or whatever is the name) game. It's just that I didn't think too well the thing, after all when this game was released there were few Zelda games to get inspired by.

It's no secret that after the SNES game the Zelda games started to get good (or at least some of the next ones would be good), but that can't be said of the first two ones. And which game will resemble a NES lookalike?

Well, it's not so bad after all. Even if at time the game feels more like a step backwards, mixing a map like those of the Final Fantasy games (or must I say, like those of the Ultima games, where it was taken from), along the dungeons of the Zelda games. But getting more into the action genre than the adventure one.

These dungeons are sets of independent rooms, each with it's enemies, camouflaged buttons, hidden passages, powerups and a few other things. Along, of course, doors to control your advance, forcing to find the way to open them (usually killing all on sight).

But still, even if this sound a bit simple, remember this was a NES game. Back in its time this all sounded better, and the fact that the game includes a memory for saving the games, instead of depending on level codes, was a great point, one that nowadays is overlooked due to the state saving features of emulators.

And also, as per usual for the console, the game is simple, yes, but fun. Doesn't go into the huge complexity you can find in some games nowadays, which usually ends in being useless of just puzzling. Here you have a nearly nonexistent plot about your uncle being kidnapped, just to put you through a chain of dungeons.

Nothing more is required, after all this is mostly an action game, taking clear influences from other games, but above all an action oriented game.

So don't come expecting a Zelda clone, and much less something like the SNES Zelda. Instead this was one of the earliest attempts to copy that franchise, and due to that expect just a fun action game.