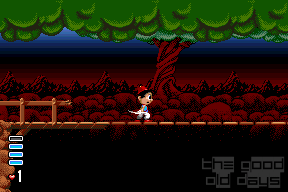 In the early 1990s, the Disney renaissance was in full swing. 1992's Aladdin managed to even eclipse the already greatly successful Little Mermaid and Beauty and the Beast commercially (then, of course, The Lion King came along, but that's a story for another day). Disney often relying on old public domain stories, myths and legend to base their animated films on, similarly themed features from other companies coming out in parallel has been a practice well known in the movie world for decades. Why not try the same in computer games? 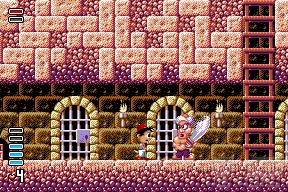 You think that's a knife?

At least so one may think looking at Arabian Nights. Featuring the protagonist sprite from what soon after was released as Soccer Kid, just with a fez instead of the sports jersey, our hero here is on a quest to save the princess. Literally. No originality prize here.

Game design, on the other hand, differs quite a bit from said Soccer Kid. Well, interpreted within the constraints of the jump'n'run genre, that is. Whereas the latter game tightly focusses on its core gimmick, this one goes for broader variety of play styles.

The most basic levels feature small mazes, chock full of hidden vault rooms, where special items need to be found and used to open locked passageways. Horizontal and vertical dimensions are put to good use in the level layout. Of course, the genre staples of moving platforms, spikes and timed challenges pop up, but just as the brief swordfights, they are mercifully fair. Overall, these levels is where Arabian Nights shines. 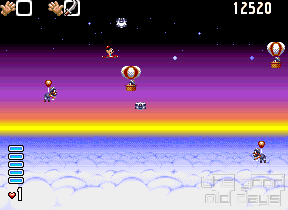 Not sure what is all of this

Though then, the ambition seems to have been to cover pretty much the whole imaginable ground of what can possibly be put into such a game. Two levels have the player flying a magic carpet in a highly disappointing horizontal shooter way. Sprites are tiny and shooting something takes so many hits that it is essentially just a game of avoiding moving obstacles. One level takes place under water. This disables the ability to use the sword, making the protagonist defenseless against approaching enemies. Also, much of this level consists of passing through invisible ducts, with no indication of where they may lead. Indiana Jones style, a race between two trolleys is thrown in which is really decided during the first seconds.

While not all awful, none of these nearly reach the level of fun provided by the aforementioned ones. Which makes Arabian Nights a bit of a mixed bag overall. In its best moments, it surely is a pleasant experience. To get there, you also have to get through some not so amazing parts, however. In its attempt to offer something to everyone, it maybe spread itself a bit thin in places. 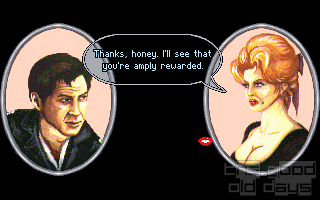