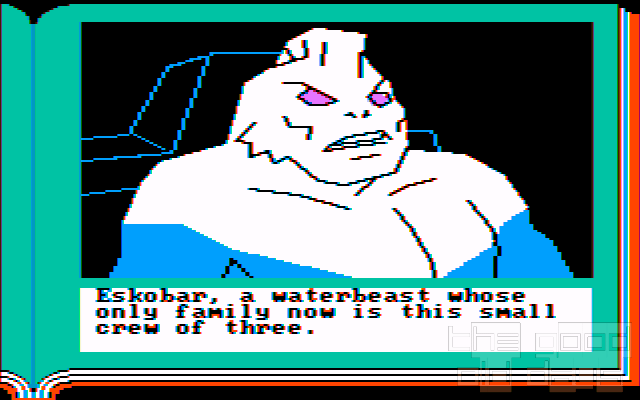 When Tom Snyder Productions built their prototype engine for the Infocomics, they created a number of example images in the sci-fi superhero genre to show the capabilities, though without any actual characters (save for their looks) and with no story to go along. After the mutual agreement to go for collaboration between them and Infocom, it seemed like a good idea to re-use these – to use a modern-day term – assets. Gamma Force was born.

Amy Briggs had already announced her departure from Infocom. Given this state, she was put on the task of “reverse engineering” a story out of what was already there. In her own words: “My task was to create a story from pre-existing images. […] I invented characters to fit their images, wrote the dialogue, and created some form of branching scheme that would logically and imaginatively encompass what was there already. […] My job was to crank something competent out, that could be sold as soon as possible.” 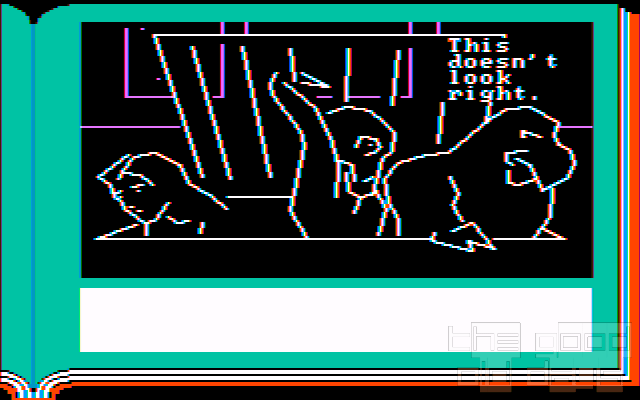 As in all Infocomics, graphics range from awful…

She adds: “I wasn’t a comic reader and I didn’t grok the concept of issues and titles, etc.”

What she did know about, however, is the concept of a classic origin story. The Pit of a Thousand Screams tells how Gamma Force, a group of three, met and received their superpowers. The group's leader is Elena, an actual princess, but having grown up in a remote village for her own safety. Her partners are Ratchet and Eskobar who previously worked as pilots for the Nast (nomen est omen), a vampiric magician-tyrant who goes rampant on a Dune-like planet. A mystic group therefore decides to form the Gamma Force in order to restore cosmic balance between good and evil. So far, so classic.

Noticeably, the game makes heavy use of the branching scheme. Essentially the complete story is told as a flashback. If this first branch is not taken by the reader, it is all over after three minutes, with an unspecific “to be continued”, but without having gotten to know any of the characters. 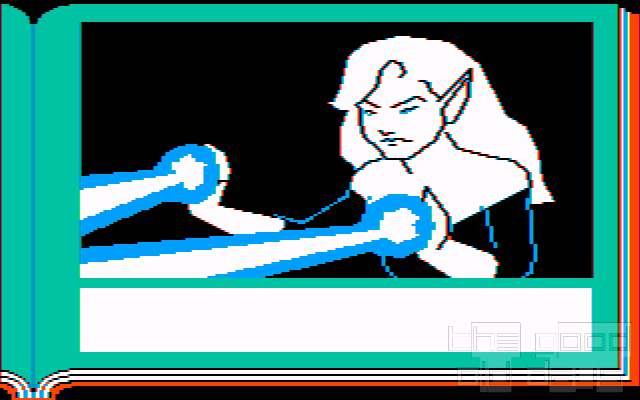 Even this extensive flashback (aka the real story) consists of many small snippets, not all of which are even comprehensible by themselves. It's not quite The Manuscript Found in Saragossa, but it is sometimes hard to follow what level of narrative one is currently on. The branching does not ensure that characters are properly introduced before they act, so that sometimes things only make sense if the reader has already seen another part of the story elsewhere before or pieces it together in retrospect. Which all indeed is possible, as the plot comes together eventually, after patiently sitting through most of the branches, but unlike in the other Infocomics, just following one or two tells no coherent story.

This can be seen as boon or bane. On the one hand, this approach expects a quite dedicated reader, willing to rewind and follow different branches quite systematically. First time readers, unfamiliar with such a thing, may very well have been repulsed. Then again, entering the space of interactive storytelling, maybe it was a good idea after all to fully embrace it? 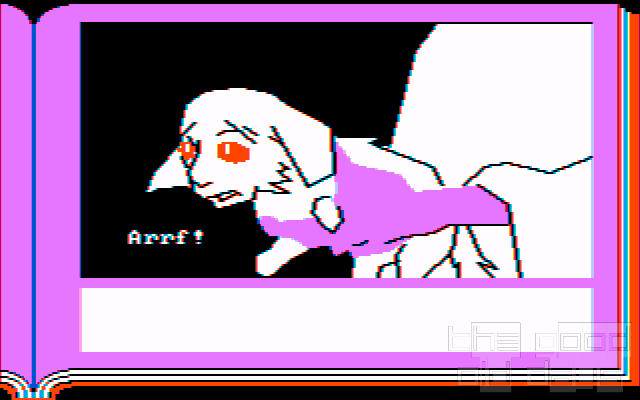 What is for sure, though, is that Gamma Force does go too far in places in its attempt to really use the engine capabilities to the fullest. When the viewpoint of a guard robot reveals nothing but following the order to imprison someone and then standing around until being destroyed by a newly powered enemy, this is not genre commentary or deconstruction, but simply appears “included, because we can”.

Many of these observations surely can be explained by the genesis of the story as described at the beginning. Given that and considering the overall generic restrictions of the concept, the result is not too shabby, but ends up rather generic at best and disjointed at worst – depending how much time the reader is willing to give it.

Moebius:
Feel free to share anything about Gamma Force - The Pit of a Thousand Screams (1988) here!
[Reply] 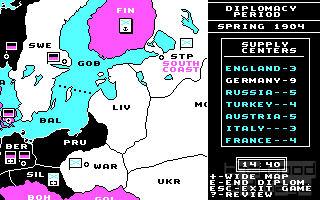