Rise of the Dragon
for Amiga (OCS/ECS) 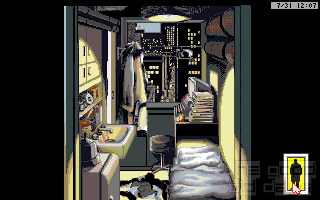 Rise of the Dragon takes you to one of these futures which are in fact historical periods. Sure, there is some sci-fi stuff floating around, like for example videophones and combined identity/credit cards. Some people are running around wearing strange body armour instead of normal clothing. But that's about it. Everything is reminiscent more of the 1930s than any kind of futuristic vision.

The player takes on the role of 'Blade' Hunter, a private investigator. He's been put on a case by the mayor himself, albeit inofficially. His daughter has met her death in a mysterious way. She's not the only victim, actually. The intro and the early cutscenes hint at a mystical consipiracy...

If there's one thing which really catches the player's attention in Dynamix' first Adventure game, it's the graphics. Everything is presented in first-person-perspective, and especially the wider shots have been very impressively drawn. Spoiling such a huge credit for good atmosphere would be very hard - and the game fortunately fails.

In some areas, it really tries, though. First, there's the controls. Left-clicking on an object uses it, right-clicking examines. Dragging something along the screen to your inventory picks it up. Sounds pretty easy. In fact, the cursor even alerts you when it touches an object. All that doesn't help if many objects have the size of only a few pixels, though.

Then, there are the dead ends. The death scenes aren't even that numerous and unfair, it's the dead ends which occur because you've said something wrong, and suddenly, the game has become unfinishable. Not that you're told about it. So you stumble around aimlessly until you finally give up.

These problems aren't too severe to spoil everything. On the whole, Rise of the Dragon isn't of above-average quality, but for players who put more stress on story and atmosphere than flawless gameplay, it's definitely a winner. 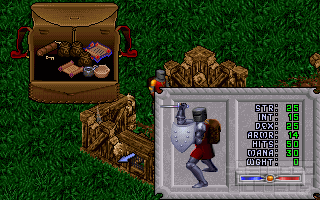