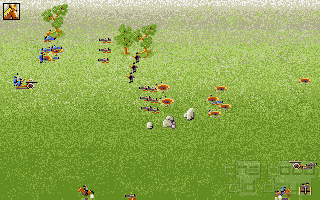 [Mr Creosote] North & South was the first Amiga game on this website. It was a conscious choice: For me, it always represented an era of graphically attractive and relatively lightweight, but fun games. It had always been one of my favourites when it came to wasting half an hour with a friend. Even today, it reminds me of more innocent times…

War has never been so much fun?

[Herr M.] That's right, those were innocent days in which a war could make for a humoristic scenario and when it didn't really matter what it means if one or the other side wins. No, North & South is more of a parody of all the clichés and myths which you might relate with the American Civil War.

[Mr Creosote] The farce is based on a Belgian comic strip, a fact which should define the tone pretty well: You're allowed to laugh about the slaughtering, because it is a cartoony version of war.

[Herr M.] Which means the slaughtering is limited to a very harmless level of violence. The soldiers drop dead without shedding any blood (just like the censors love it) and the most cruel image is actually the defeat screen on the loser's side which shows a couple of dead soldiers. Since there is almost no intellectual challenge to speak of and absolutely no political propaganda, it's really obvious that this game is all about having fun.

[Mr Creosote] Who is fighting for what – it just doesn't matter. There is no 'good' and 'evil', more like 'dumb' and 'dumber' if you look at the clowns who are supposed to be the commanders.

The game as a mirror image of its time?

[Herr M.] To prevent their mental capabilities from overstraining, the game does not go all too deeply. Basically, it is split into a couple of mini games which are tightly interconnected. And each one of them can be understood pretty much immediately.

[Mr Creosote] It all begins with shoving little army pieces around on a pretty map separated into states. Whoever moves an army into a state takes control of it. It doesn't get more intuitive.

[Herr M.] And naturally, depending on the number of states you control, you will get more or less money to raise new armies. Though you also have to take care of controlling some special states, in particular those with forts, so that your money can be transported.

[Mr Creosote] Which, if you try to interpret it in a more serious way on a gameplay level, is probably the attempt to simulate the essential importance of logistics and infrastructure in this (historical) war. After all, the American Civil War is often considered one of the first industrialised/modern wars. So it's not surprising that storming those forts and the switching points of the train connections as well as ambushing the trains themselves play a central role.

[Herr M.] Those have their own sequence in which you have to run your soldier from one end of the fort/train to the other against the ticking clock in classic platformer style while the enemy tries to stop you. An interesting choice, considering that most people would have expected another battle scene.

[Mr Creosote] If the attacker manages to raise his flag, the defenders' morale just drops completely

For the train, this makes more sense, because it is actually about forcing the engine driver to stop the train if you manage to reach him. It is a bit of a pity that these two scenes are so similar. Still fun!

[Herr M.] That goes without saying and even if these two are similar, they are still a nice diversion from the main part of the game: the battles. They are relatively simple too. Both sides have the same three unit types of which just small groups are on the battlefield.

[Mr Creosote] Cannons, cavallery armed with sabres and foot soldiers armed with rifles are available. You can switch between these three and try to use the specific terrain of each battlefield to gain the advantage over the enemy soldiers while keeping your own losses at a minimum – action style with just a hint of tactics.

[Herr M.] Indeed, the landscape plays the most critical tactical role: On an open field, it is basically a question of getting your troops close to the enemy as quickly as possible. Though when there is a river or a canyon, things get much more interesting. You can always destroy the bridge with your cannon which only leaves a small path or a fjord to cross. So what will you do? Make the bridge collapse first? Or try to cross it quickly with your cavallery?

[Mr Creosote] In those more complex landscapes, the differences between the units also become more important. Soldiers trying to cross the fjord, for example, are an easy target for cannons. Those, in turn, need to beware of fast moving cavallery. It is a simple, but effective Rock, Paper, Scissors concept.

[Herr M.] Yes, basically, it is quite a simple concept which is a lot of fun. Except for the AI, which is a little overburdened with it. Its strongest side is working with the cannon (because, as usual for a computer, it knows the exact distance to shoot at), but with the other units, its attacks look much more like kamikaze.

[Mr Creosote] Senseless kamikaze. If there is a river or a canyon, it is virtually impossible to lose against a computer controlled enemy: You just place your own soldiers close to abyss/the shore and watch the enemies walk right into it and fall to their deaths! The pathfinding routing can't really have ever been given any real testing.

[Herr M.] True to the old saying 'Every dog has his day', it manages to overcome one or another unit from time to time or even win a battle, but more often than not, this is more likely due to the player's surprise about those short flashes of unexpected clarity from the enemy.

[Mr Creosote] You'd have to have an enormous amount of bad luck for that to happen. Quality control must have failed on all accounts in this case – which leads us straight to the two player mode.

[Herr M.] That actually looks completely differently. At least it becomes a little bit clearer why the AI behaves so badly. A purely offensive tactic almost always leads to a defeat.

[Mr Creosote] Well, of course it doesn't actually look differently. The game still consists of the same elements. Just that they suddenly play way differently. In particular, the battles become much more tactical, because they mean much more.

[Herr M.] You really notice that the enemy armies now behave much less predictable and battles up to the last man standing become much more common. Which makes them much more exciting, because it is just a completely different feeling to get your last soldier close to the enemy in the hope that you can still win the battle (in a Phyrric victory).

[Mr Creosote] Whether it will turn into a Phyrric victory, you will of course only learn after a couple of further turns on the strategic level. But for the moment, it is a hugely satisfying sensation to win a battle against a human opponent – especially against a superior army.

[Herr M.] If there is anything to say against the battles versus human opponents, it is the lack of options becoming somewhat too noticeable. For example, if there is only a small fjord left to cross the river, but the armies are still on opposite sides. Crossing the fjord is prone to losing men anyway. Being shot at from the other side makes it virtually impossible to reach the enemy. Sometimes, stalemates just happen and then, retreat would be the only logical consequence.

[Mr Creosote] Which would be technically possible. So that would mean that the attacker didn't manage to take over the state, but without having been decisively defeated.

[Herr M.] Yes, it is technically possible… But who would retreat first? In the end, this is a question of who maintains his cool, which could take the steam off an action packed game if the players took it too far.

[Mr Creosote] That's right, but this isn't even all that unrealistic, is it? Wild, impatient assaults usually end in defeat. Admittedly, the combatants shouldn't act all too tactically experienced, because otherwise, everything will come to a total standstill. Though on the other hand, you should develop a killer instinct to immediately use any opportunity on the strategic level of the map: Open flanks are just too inviting to reach deeply into the enemy's back-country where you can then disturb his supply logistics quite easily.

[Herr M.] Also, you should keep an eye on certain states of particularly high strategic importance. One on the east coast provides new troops in regular intervals, for example. And certain railroad junctions, namely those with more than one connection to other nodes, should also not be underestimated.

[Mr Creosote] The west, where three out of overall five forts are located, are dangerous ground in another way, though: Indians tend to ambush armies there. Just like the European supplies, this is a small random element which can give a seemingly stalled situation quite some new momentum.

[Herr M.] And then, there is also the thunderstorm which prevents troops from moving and thus can lead even to a completely different starting situation. You can turn these random elements off, but this reduces the variety a bit and the game becomes a little more predictable.

[Mr Creosote] I believe we have really covered every little detail of the game. Meaning, once again, that this surely isn't a very deep game. The variety isn't huge.

[Herr M.] Which really isn't necessary for an entertaining game which you just take out regularly to have a couple of battles. I'd rather have just a few very well made elements like this than a huge collection of meaningless extras.

[Mr Creosote] Right, and that gets us back to what I mentioned initially: It is an entertaining game which doesn't take itself too seriously, which can be learned intuitively within a very short timeframe and of which no game lasts longer than the magic half-hour slot. So it is really ideal to enjoy some multiplayer action without any preparation!

[Herr M.] I agree, there is really nothing much to add, apart from maybe mentioning that the single player mode is still recommendable in spite of (or maybe even because of) the stupid AI enemies.

[Mr Creosote] OK, you can play it like that from time to time, yes. Though it only begins to really make sense as soon as you sit down in front of the TV with a friend.

[Herr M.] And that's just the way a cartoon should be enjoyed! 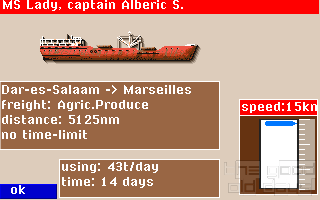