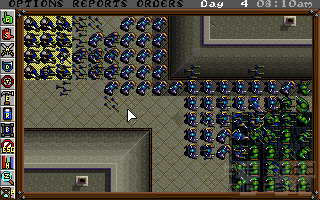 If it had been released just a few months later, it would have been labelled 'real time strategy'. Mindcraft was lucky to have been spared this curse, because it would have done their game an outragous injustice, because although the words themselves would even have been appropriate, they would become associated with a particularly bland, limited formula which Siege did not fit into.

While many wargames at the time sought to communicate a notion of fairness to its players by giving each player equal starting positions, Siege does exactly the opposite. One side's task is to take a fortress, the other's (obviously) to defend it. Different roles, but still, most scenarios are actually quite balanced and fair, i.e. they can be won by either side. An observation which speaks volumes about the art of level design, carefully done instead of taking the lazy way out (i.e. just making a symmetric map). A task which falls to the player if she decides to use the built-in level editor. 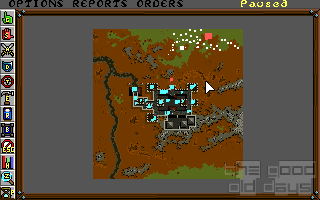 Though let's take a step back. A fortress usually contains walls as well as one or more gates. In the absence of artillery, the attacker will attempt to scale these walls or break down those gates. The defender will try to prevent that by raining down all sorts of projectiles on the troops trying to place ladders on the walls or destroying the battering rams before they can do any serious damage. The attacker then sends in the big guys with their swords to wreak havoc among the defending troops not to well equipped for close combat – while the defender desperately tries to relocate some of her own appropriate troops to the breached location.

This is the formula which Siege delivers in various small variants. The fortress can have more than one line of defense, i.e. there can be a moat around it or several inner castle walls inside. The defender can try to meet the attacker at the outermost ring, giving her the opportunity to fall back and regroup if anything goes wrong, but that's obviously also the largest ground to cover. Likewise, a full frontal assault will usually not serve the attacker well – she has to come up with a (preferably) sneaky strategy as well.

The interface supports the multi-faceted strategic level quite well. Soldiers can be grouped, including mixing those of different types. Only part of the complete armies can be on the battlefield at the same time; since the battles take days to reach a decision, the soldiers need rest periods and wounded (but not dead) ones are sent to the hospital to be treated and recover. Orders given to groups range from shooting at will, holding certain positions or patrolling certain areas to targetting particular enemies or using special abilities (such as, you guessed it, setting down ladders). 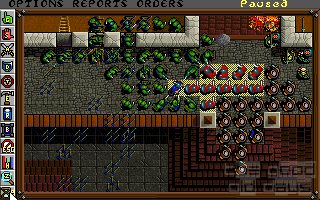 On the other hand, what doesn't work quite as well is the graphics. The battlefield can be viewed in three zoom levels. The smallest one gives a rough overview of the complete surroundings, but it's completely useless to get anything done. The largest one is so close to the action that there is zero overview. The one in between seems to be right as far as the distance from the action is concerned, but too much information is lost. To name just the two most glaring issues: Unit types cannot be distinguished and battle actions (such as shots being fired) are not visible anymore!

The artificial intelligence is fairly competent at both the defending and the attacking role and thus presents an able challenge even to more experienced players. It's just a pity that higher difficulty levels do not really equal a smarter opponent; the AI, for example, will not recognise obvious opportunities like undefended wings of the castle or taking advantage of the changing of the guards. Instead, the human player is simply penalised by only being able to deploy less soldiers, standing against a (quantity-wise) stronger opponent. So the verdict in this respect is 'good enough'.

In spite of minor downsides, Siege is simply a well-crafted game. It may seem like the whole concept of repeatedly attacking and defending castles would not carry a full-sized game, but don't underestimate the strategic and tactical finesse which comes with a different castle layout if the options are simulated in such detail as in this game. Though, admittedly, this makes Siege a game for hardcore strategy lovers. As such, it was underrated and overlooked when it first came out and it has fallen into even more extreme obscurity by now. It would be high time for an excavation!

Mr Creosote (2000-09-11):
Quote:
Siege & Ambush At Sorinor & Walls Of Rome: A series of games very similar to each other. The screenshots look almost identical. And all the games are quite similar in fact They're all pioneers of the RTS genre. That means much action is in them. But in contrast to current titles, the strategy- component is stressed. This becomes clear when you discover that you can give orders to your army when the game is paused. 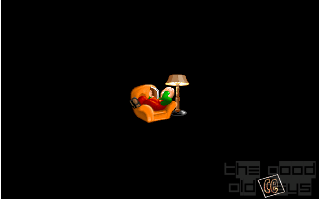