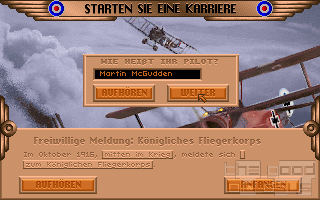 With the advent of new technologies comes a time of innovation, a time when pioneers set out to explore the potential of the latest inventions. Red Baron is remarkable in this concern because it is not only about the early days of a new kind of warfare, but because it was in itself one of the first dedicated combat flight simulators for home computers set in this era. And so it helped to lay down the basics of the genre just like the historical biplanes in it did for the aerial combat. A very fitting combination so to speak which gives the game a timeless appeal: Entering this world of rough 3D graphics and simplistic flight models seems to have a lot in common with taking off in one of those fragile flying machines of WWI. But let us take a look at how exactly this works to the game’s (dis)advantage and what else makes it a classic.

The one most obvious thing you will notice as soon as you sit in the cockpit of your plane will be how simple things are: The instruments keep track of the bare basics like oil pressure, fuel, heading and flight speed. Controlling your plane is limited to turning it left or right, pushing it up or down and adjusting the motor’s rpm. And your sole mean of attack is one or two machine guns with no ammo counter and an inclination to jam at the most critical moments. That is it, everything else, from navigation, to spotting your enemies and aiming at them, to keeping track of the progress of your mission, you will have to do for yourself. It is a good thing that the missions do not get overly complicated too – whether by technical limitations or by clever design – and the actual gameplay stays focused on the dogfights, without the need to filter a flood of superfluous information or to adjust a gazillion parameters during the flight.

This comes at a price though: The world itself is rather empty. You may spot some landmarks (most notably the trenches or larger towns) but they are just painted on the ground, and you can get as close as you want to, they will always remain some coloured squares and lines. If you are lucky you might spot the one or the other train moving around, but almost all of the more active objects can be found up in the air. Even there things do not get overly crowded though, because at best you will meet something about 10 planes in a single mission and never at once but in wings of up to four. Still, since the dogfights can be rather deadly this is actually beneficial to your chances of survival.

Speaking of which, depending on the realism settings you choose the fighting can range from child’s play to roller coaster from hell. Besides being able to set the handling of your plane and the skill of enemy AI pilots you can also toggle things like unlimited ammunition or fuel, mid air collisions, gun jams or taking no damage at all. Somehow it is like an in-built cheat mode, that lets you set the challenge rating exactly to your liking and makes for a very smooth learning curve. Don’t know if you are up to actually hitting the broad side of a zeppelin? Just activate the invulnerability and take your time. Getting bored of shooting down one wave after the other? Sounds like it is high time to limit your ammunition in order to make every bullet count or rely a bit more on your fellow wingmen.

Your options do not stop at setting the accuracy of the simulation though. You can fly 17 aircrafts (ranging from humble scouts up to full warplanes) in 8 types of missions. Basically your assignments fall into three categories: Scouting, escorting/defending and attacking. Depending on the targets there is a bit of variety to each of them though. For example: attacking an immobile balloon defended by heavy flak is a bit different than taking down a fast and agile plane or a slow moving, but heavily armed and therefore extremely deadly zeppelin. On the other hand it is a lot easier to keep your enemies away from a fleeing aeroplane than from a stationary target. Besides those standardised missions you can also test yourself at recreations of historic missions or at besting one of the famous aces.

Said aces take a very prominent role in the game and add a lot of flavour. In addition to the eponymous Manfred from Richthofen you will meet about 20 other top pilots. Each one comes with a short biography, a showcase for their personal planes and the possibility to challenge them to a dogfight. While the latter one admittedly does not quite live up to what you could hope for, because there is not that much of a difference to a normal duel besides one of the planes having a different paint job and being slightly more aggressive, the historical data is actually quite interesting and gives your enemies a bit of character.

On top of that you can join their ranks by starting you own career in the campaign mode, which strings about 40 missions together, while keeping track of your overall score and your number of victories (i.e. kills). While the first one is negligible at best – it is mainly for bragging and for the high score list – the latter one determines awards and promotions. At certain numbers you will get medals and rise in rank. The most important ones are the 5th, when you gain the title of ace and might be invited to join special squadrons, and the 23rd kill, when you become Captain/Rittmeister and not only get to adjust the mission parameters to some degree but also your very own plane, whose fuselage and wings you can paint in one of eight colours in order to give it your very own looks.

You can join either the Royal Flying Corps or the Luftstreitkräfte. Besides some cosmetic changes, like names or background pictures, this does have a huge impact on one of two things. For one you will fly a lot more defensive missions on the British/French side of the border, especially zeppelins are only found in the sky over England. And for two while neither side always has the upper hand there are distinct advantages to both of them.

The most obvious one are stages of the war, when the introduction of a new plane upsets the balance. E.g.: You will be flying the Fokker Eindecker (worst German plane) a lot longer than the Morane Bullet (French equivalent), which makes the early stages of the war a bit harder on the German side. On the other hand the Fokker D.VII might simply be the best fighter in the game and comes a lot earlier than the Sopwith Snipe (which you can only fly in the last two missions of your career). Also, depending on the weather conditions the British planes (with their dark green colour on the green ground) are harder to spot than the German or French ones. On the other hand most of the German planes have two guns instead of one (this is especially important if you play with limited ammunition).

But those details aside the campaigns play the same and you will see a lot of repetition. Sadly your missions do not seem to have any influence on the war. Whether you accomplished your mission or not, whether you lost a lot of men: The next mission will always look the same. That is if you are not shot down and die or end up in a hospital/prison camp. But even then you will just skip a couple of months/missions (that is if you are not dead) and it is simply avoided by backing up your character.

If you want to keep track of your career aside the statistics found in your pilot’s dossier, or simply think the next flight is going to be memorable one way or another, you can use the game’s mission recorder. Every time you take off you are asked if you want to save the mission to a ‘tape’ – which by the way can get kind of annoying. If you say yes, you can watch your flying skills in the game’s recorder. Besides being able to watch each and every object from any angle you like, you can jump right into the simulation any time you like and replay the mission from there, which is a rather nice feature (especially when training for certain situations).

So far, so technical, but what is it that makes you want to record those missions or see the war through to the armistice? The main reason has to be how Red Baron manages to offer you just the right amount of challenge to care about you victories. Learning how to fly the plane and taking down the first couple of opponents does not take much, you do not even need to read the manual (even though it is still highly recommended for the very interesting treatise on the historical background). But taking down a full squadron of enemy fighters on your own, while dodging flak fire and trying to get to those pesky balloons does need a lot of training.

Training you spend with a very flexible learning curve, that you can fit to your hearts content. Even if the missions themselves do get kind of repetitive after a while, the game does its best to give you some room to decide for yourself what keeps you on your toes. And that is exactly what will keep you coming back. Forget about the breath taking graphics, for they are dated by now (though still functional enough). Never mind the absence of decent sound or even music. What makes this a good simulator is its versatility, how it lets you set up the realism of the fights just the way you like, while keeping things simple enough that you do not need a PhD to understand what you are doing.

Add to this the facts that it features a unique setting that fits the limitations of the contemporary processing power like a glove plus the nice amount of historical details it manages to get across and you get a game that easily shoots 4 out of 6 of its competitors out of the sky.

The original review has been archived. This entry remains for reference.

Tuomo:
when I was 8 year old I used to play this game and nowdays I miss the good old days.....
[Reply] 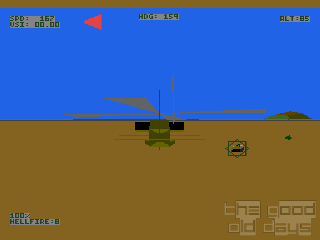