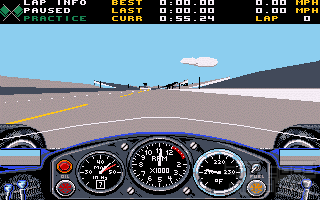 Indianapolis 500 is one of the first racing sims that kept me from doing anything else than racing around the famous 'Brickyard'. The game itself is actually quite simple: The Indianapolis Raceway is the only track and you can choose from three different cars. But the ultimate challenge, to finish the Indy 500 race (which takes about 2-3 hours of pure racing time) is what keeps you motivated. And very rarely you will have this satifying feeling of seeing the chequered flag.

The first thing you have to do is to select which car to drive. You can choose between three different teams. The slowest but safest is the blue March-Cosworth, but you can hardly win a race with it. The red Lola-Buick is a stable, relatively fast car good for top-ten placings. But if you want to win races you have to drive the yellow Penske-Chevrolet. This is a very powerful and fast machine but it requires a lot of practice to get safely through the corners.

Next it's time for some practice laps. There your car cannot be damaged and you can get used to the characteristics of the 2,5 mile oval race track with its four corners. You have to drive your car very precisely through them otherwise you'll lose quite some speed skidding off the ideal racing line, especially with the Penske. You can improve the handling of your car by numerous setup changes. Increasing the wings makes it more stable but the higher drag will slow it down on the straights. Altering gear ratios has an influence on top speed and acceleration. You can also play around with shocks, tire pressures, tire compounds and anti-roll bars. Each car has a turbo but switching it to a higher level than 7 will consume too much fuel to stay competitive. When you're satisfied with your setup you should try to reach a good qualifying time. For that you're doing four full speed laps and the average of all four laps determines your qualifying time and hence your grid position. Then it's 'Gentlemen, start your engines!'.

You can choose from four distances. There's a quick 10 lap race with no car damage (at least to yours - ever tried going the wrong way and wreaking havoc on the other drivers?

and no yellow flags (they slow down the race after an accident), a 30 lap race (no damage but with flags), a 60 lap race and the full distance 200 lap race.

Racing around the Brickyard isn't that easy. There are 33 cars on the track and they greatly differ in speed. So either you're in danger of running into a slower contender or getting ran into by the really fast cars. Better you always watch your mirrors! Every 30-35 laps you have to come into the pits for fuel and fresh tires (practice those pit stops or you will surely miss your crew!). During the race the number of cars around drops constantly. Some cars retire due to mechanical failures (something which cannot happen to you), others finish their race in spectacular crashes (many times you will be this unlucky fellow!) which can throw out several contenders at once. You can watch the best scenes with the replay function which shows the last 20 seconds from different camera angles. So lap after lap you're trying to stay on the track and in one piece - there's no way of saving the game! That's where the frustrating part of the game comes into play: It's tough to crash into another car after 130 or so laps and to have to start all over again. 'But next time I'm gonna make it through!' you think and that's the motivation which lets you play Indianapolis 500 again and again. But just coming through and winning the race is something completely different...

This great racing simulation is quite old (1989) so you can't expect too much from the graphics. But they are good enough to find your way around the track without any problems. Sounds are annoying in the PC-version (PC-speaker) and should be turned off or you will need something against your headache very soon.

Apart from these minor negative aspects Indianapolis 500 is one of the first realistic racing games which will keep you entertained for a long time. Maybe YOU will be able to finish the full race in first place (I never managed to do so despite countless tries)!

Tuss:
Originally posted by Mr Creosote at 09:54 on January 9th, 2008:
My hat is off to you who actually completed this game. Especially considering it's just an 'easy' round course, it needs all the more concentration to be alert at all times.

Mr Creosote:
My hat is off to you who actually completed this game. Especially considering it's just an 'easy' round course, it needs all the more concentration to be alert at all times.
guytou:

Festy:
OMG! I loved this game! I'll never forget when I was in highschool and spent a whole weekend playing it. On the Sunday, I spent 5 hours attempting to complete a 200 lap race (with lots of game pausing every now and then for refreshments and lunch) only to crash on the 175th lap whilst in first position. I don't think I ever played it again after that. What a great game. What a great memory. Thanks.
[Reply] 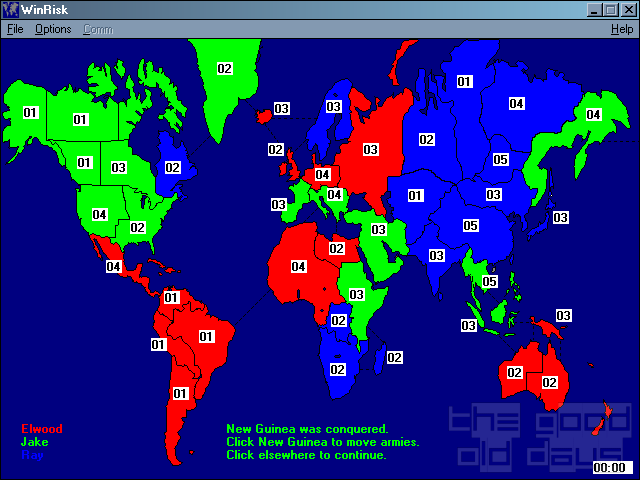