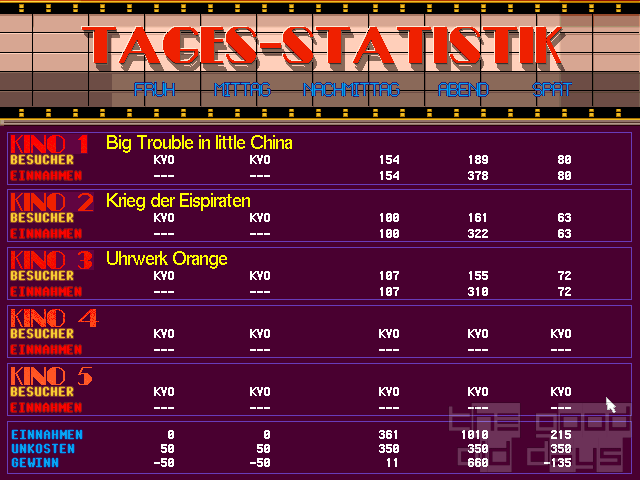 Well, who ever wasn't angry about watching a highly praised movie in the cinema which turned out to be quite bad? I guess everyone so with this game you have the chance to make movies with your own imagination. From the script up to the costumes you have all things in your hands.

Your grandpa inhereted you a cinema center in the USA with 5 differently sized cinemas. You have to run them as profitably as possible; therefore you first make your way to the next movie distributor and lease some flicks of your choice. They range from action, monumental movies, western and just about every other genre. Their quality is shown by a certain number of stars, with none meaning 'absolute crap' and six 'top movie'. You then show these movies in your cinemas and thus earn your money. Ticket prices can be set for every cinema individually.

After some time you might have enough cash (maybe with a little help from the local bank) to make your first own movie...And now it's getting expensive.

Each movie is based on a script so you write one. For this you have 5 huge lists of words with which you combine your storyline, like 'Adventurous beggar explores fascinating island'. Obviously there is an almost indefinite number of combinations possible, which are more or less senseful. You can also decide over how much action, fun, violence, sex etc. should be in this movie. Then there's the choice of the scenery, the backgrounds, the genre and the time in which the action takes place. But what would a movie be without actors and a director? Pretty weird, actually, so let's head to the movie agency. There you can choose actors, producers, directors, camera teams, stunt teams and extras. Each actor and director has certain skills which are quite important. In this departement it's quite remarkable that although there are no real names used you can easily find out which actual actors are represented. And the one or the other will surely bring a smile in your face. Finally you have to choose the costumes and maybe some special effects. You can influence the estimated time frame but there's a minimum of 50 days for making any movie.

During this time you continue to earn money with your cinemas. Randomly events occur like thunderstorms devastating the set (=> more expenses) or ill actors and strikes (=> more time needed). After the movie has been finished you get the final bill which normally is much larger than expected. After the premiere you get a review with which you can guess how many visitiors it will attract. Each Wednesday the movie charts are updated where you can see how many, if any, people watched your movie. For every sold ticket you get 2 bucks. After you have recovered from your first flop you can start your second project.

Goal of this game is to get as many points as possible and this introduce yourself into the Hall of Fame of movie producers. You get these points for high rankings in the movie charts, the Alltime charts and also for various awards you'll maybe get some day.

All in all this game lacks a bit complexity; there's neither a marketing section nor a stock market or stuff. The long term motivation is held up by the urge to make the ultimate movie which breaks all visitor records and, after having achieved that, topping this feat again. For everyone who likes simple yet interesting bizsims I can recommend this game. 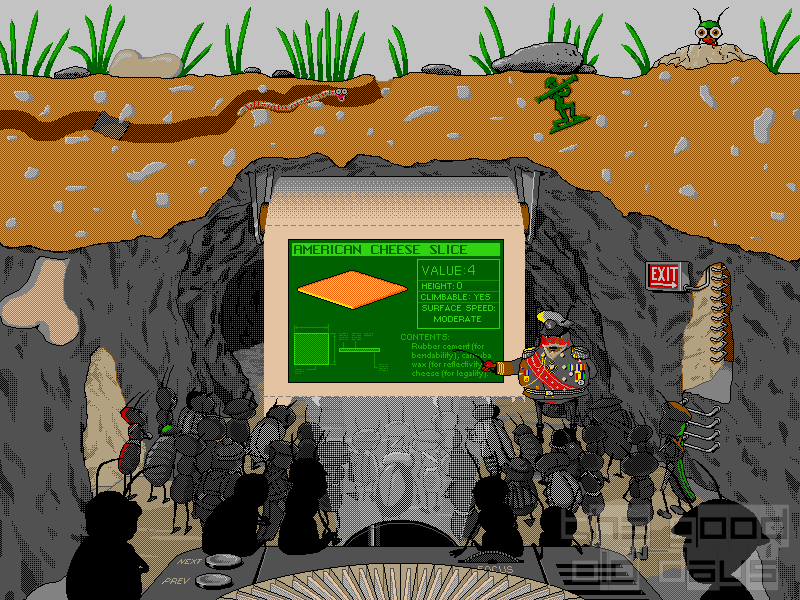