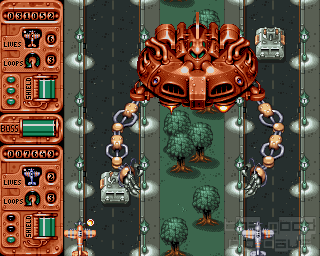 Banshee is a very late arrival in the genre of shooters. In 1994, the gaming industry started moving everything towards 'three-dimensional' games, and classic concepts like this one slowly died out. Thankfully, this genre (at least the subgenre of 'vertical shooters') got one final hit with this game.

The somewhat strange 'story' involves another dimension, in which an alien dictator wants to conquer earth. This planet is a little different from ours, because there, the scientists refused (?) to develope anything more advanced than the level of industrialization. One inventor/hero is left to save earth. For that, he quickly builds a plane, calls it Banshee and lifts off...

As irrelevant this story may be, it guarantees a stylish Victorian setting at least. Some crude 'high tech' has been added to the mix which makes Banshee the Chaos Engine of plane shooters. The very well-done graphics get the feeling across easily.

Unfortunately, it's quite the opposite with the sound. After the relatively boring intro music, you have to do with monotonous shooting sounds and explosions. This gets on one's nerves more quickly than you might believe. The controls, on the other hand, are excellent. Joysticks with one or two fire buttons are supported, as well as mice. All three options are working fine.

As for enemies, the usual mix of air and ground targets are waiting to be destroyed. Power ups which can sometimes be changed into others by shooting at them in best genre tradition can be picked up. This way, fire power, agility and shield are improved over time.

It should be mentioned that you won't die from a single hit (like so often). Instead, you have an energy bar which has to be reduced to zero before you lose a life, and which can be restored by collecting first-aid-kits. Fairness is improved a lot by that, especially in the harder (but not too hard) later stages of the game.

Two player mode is of course most fun. Here, your friend gets into a second Banshee and you're facing the enemy hordes together. The only downpoint is the slowly decreasing overview. With all the simultanous explosions, trailing rockets and misc shots flying around, it sometimes gets hard to tell threats apart from the rest.

Banshee easily climbs the throne of vertical shooters mainly due to its low potential for frustration. Ever changing levels and imaginative bosses are adding to that and they keep motivation up to the end. 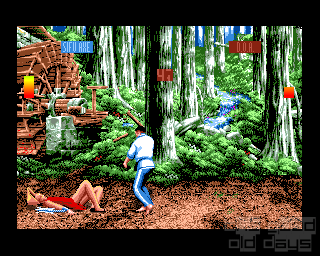