The Savage Empire
for PC (DOS) 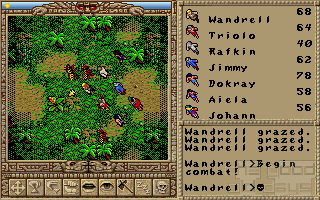 At a difference from the linear Ultima here you won't get any side quest, and the main one is not too large and complicated. Go from one of the villages to another, work for them and get their alliance. Those jobs can be quite simple, such as getting weapons for the warriors; long as it is giving back the throne to the true king of the aztec-like people; and some of them will require of your wits, like the test of the merry Disquiqui, the one of putting a bell on the neck of a tyrannosaurus rex.

The game mechanics have, as usual, been improved, comparing to the Ultima, after all the engine is the same of Ultima VI. One of the main changes is that the characters and the party are smaller so the screen is easier to see. Also, more related to world design, all the villages are filled with objects, many of them, such as the food, useful if you wish to steal, and a some interesting interactions has been added, you may for example cut the bodies of animals to get meat, and you can create gunpowder, for using in bombs and simple rifles.

Even though the game is quite good there is a downside compared to the normal Ultima, related to the lack of true secondary quests and which perhaps shows the game is unfinished, the villages are filled with generic characters all of which say the same things. But in general, the game is quite entertaining, and a variation of the typical medieval/renaissance theme of the Origin role games. 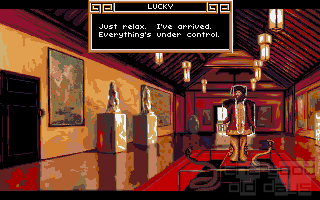