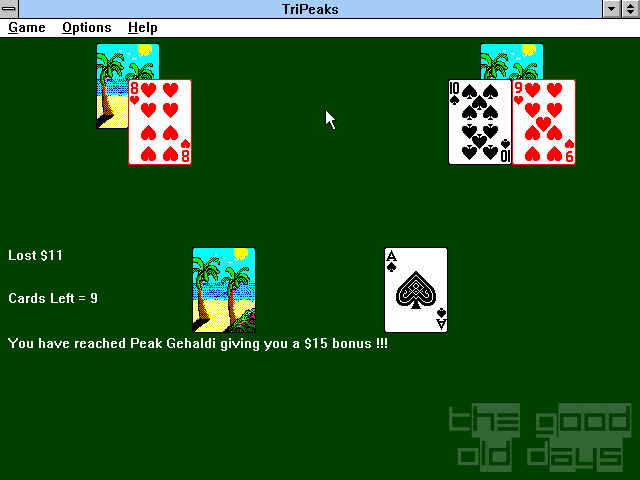 Microsoft Entertainment Package is a pack of 29 games, which were originally released for Windows 3.1. Over the time, some games disappeared, others are still to be found. Few of the games are original. Yet, they compose a fairly entertaining mix no office computer should be without. And home computers will bennefit from this package as well - some of the games are fun and addictive. Let us take a closer look what this package offers:

Chess. The chess program is fairly simple, and its multiple window layout allows for considerable level of interface customization. The downside of this game is that the computer takes incredibly long to think about the next move. Even on a 800MHz computer, it took sometimes over a minute till the computer moved.

Chip's Challenge. Chip's Challenge is a fairly entertaining puzzle game. Here, you have to find your way out of a level by collecting various keys and taking advantage of various surfaces and bricks, while dodging the monsters.

Cruel. Cruel is a well-known Solitaire-type game. In this game, which I found very hard to win, you start with 12 piles of cards, which you have to rearrange. You can remove cards in a particular order, and only when you remove all of them you win.

Dr. Black Jack. This is a classic BlackJack game. In addition to the basic settings, this game also offers advanced plays, such as doubling and splitting. However, due to the fact that this game allows just one player to play and that it cheats considerably, it gets quickly frustrating.

Fuji Golf. Fuji Golf is a surprisingly entertaining golf game, and arguably the best game of this package. The game offers only one golf course and one mode, where you play against 39 other opponents. You have your standard choice of golf sticks, and you play against the usual sand traps, water hazards and wind. The green even includes sloping, which is quite unusual for such a small game. The only downside I have noticed is that the display never rotates. In other golf games, I am used to always have the display (such as wind conditions) being recalculated to reflect the direction my player is facing, in this game, however, the display is set and your player rotates. It takes a little while to get used to it. Many thanks to Jean, Alvaro and Matthew who sent me this game, independently on each other.

Go Figure! This is more edutainment than a real game. Here, you get a bunch of numbers and a result. It is your task to arrange the numbers and use the addition and subtraction marks to get the desired result. Due to the high difficulty of the puzzles, this game can be either very entertaining or very frustrating.

Golf. Golf is another solitaire game. As usualy, you have to clean up the board. This game, however, can get very frustrating - my long-term winning percentage is only about 5%...

IdleWild. IdleWild is a screensaver program. Unlike other screensavers, however, you have to start it manually and then select the delay timer. This is one of the most useless, yet most interesting programs I have ever seen. Now that I think of it, I guess I find it interesting because it is so useless...

Jezz Ball. This is an entertaining action puzzle game. The goal is to clear up as much of the board as possible. You do this by dividing the board into smaller parts, which don't contain any of the balls that are floating around. These balls, however, can also iterrupt you if they hit the line you are dividing the board with. After a few hits, the game ends. Overall, Jezz Ball is one of the better games in this package.

JigSawed is a utility to create and play jigsaw puzzles. Simply load any .bmp file, and it will be cut into several pieces, which you then have to put together. Deffinitelly entertaining, but due to the lack of advanced options (such as number of pieces), the replay value is relatively low.

Klotski. Klotski is one of the most frustyrating puzzle games I have seen. The goalis to get a square from one side of the puzzle to the other. However, you have to do it by shifting other pieces around the cube. It always seems that there is less space than required, and I'd admire anybody who'd finish this puzzle.

LifeGenesis is a utility that simulates Petri dishes. To be honest, I have absolutely no clue how did this thing find its way into the Microsoft Entertainment Pack, and why.

Maxwell's Maniac. This game is very similar to Jezz Ball. Once again, you have an action-puzzle, involving bouncing balls. This time, however, you have to get them from one side of the field to the other and prevent them from escaping, using some kind of a sliding door. While the initial levels are quite fun, the later levels involve so many balls, that you'll win them only by pure luck. This makes the later levels pretty boring. In addition, the fact that actually losing the game properly in order to get an entry into the High Score list is almost as difficult as playing the game, only adds to the monotony.

Pegged. Pegged is an ancient puzzle game (I still have the board version at home). The goal is, as in so many other puzzle games, to clear the board. The game offers several boards, but within a few games, you'll get into a certain stereotype, which will make the game a little less interesting.

Pipe Dream. One of the best known games in the packaqge, in Pipe Dream you are building a network of pipes through which some kind of liquid will flow soon. This game is highly addictive, due to its simple, yet pretty powerful idea. I was surprised to see LucasArts credited here, but I guess they came up with the concept.

Rattler Race. This is the classic snake game. Actually, this is one of the best Snake variants I have seen - the board is a little small, but the movement and layout is a perfect conversion of the arcade game.

Rodent's Revenge. Rodent's Revenge is a puizzle game, where you assume the role of a mouse. You have to shift walls to disable the cats that are chasing you, and eventually get the the cheese. This game is unpredictable enough to offer you a relatively high replay value.

SkiFree. I know people who love this game; I never could even understand it. Here, you ski down the slope. You have to avoid trees, rocks, snowboarders and beginners. You can run over dogs, jump or do some slalom. However, whatever you do, you'll end up eaten by a yeti (at least I think it's a yeti - hard to say with those graphics) I personally never managed to get a potitive score; my best was -22...

Stones. Stones is an ancient Asian game, which works like a reverse Mahjong. I never fully understood this game, maybe you'll have better luck...

Tetravex is a highly addictive puzzle game, where you have to fill a square with smaller squares. These smaller squares have number on their sides; you have to match those. This simple concept can give you hours of fun when the boss is not watching.

Tetris. This is one of the best tetris clones for PC. It offers single and multiplayer modes, with the option to penalize the other player as well. In addition, the graphics are kept simple, which only helps the gameplay. The only gripe I have is the set of terrible and distracting backgrounds the game features.

TicTactics. This is a simple Tic-Tac-Toe, which you can play in three different modes - in the classic layout, in a 3x3x3 cube or 4x4x4 cube. The last option is highly entertaining and pretty challenging on the higher difficulty levels.

Tic Tac Drop. Tic Tac Drop is a Connect Four clone. It features pretty good graphics, probably the best A.I. in this collection and the possibility to fully customize the board and rules. Deffinitelly a game that should be on every desktop.

Taipei. Taipei is as a classic Mahjong game as you could wish for. Clear graphics make it easy to read the board, while seven different layouts ensure hours of fun. The only gripe I have here is that the game includes impossible boards as well.

TriPeaks is for me the most addictive game in this package. Several times already I spent an allnighter playing it. Once again, it is a Solitaire-type game, but with such a high playability, further enhanced by lifetime statistics, that I am very careful every time I run across this game - I could miss another night of sleep.

Tut's Tomb is yet another Solitaire game. This time, you have to emply your brain cells as well, as only pairs of cards with a total of 13 can be cleared. This game depends more on luck than any other - while sometimes I manage to clear the field in 5 minutes, my last game took over 2 hours.

Wordzap. Wordzap is another edutainment game, which I never fully comprehended (when I got this package, I dodn't speak a word of English, and I never really returned to play it). Basically, you have to create words from the given letters, against the computer and time. 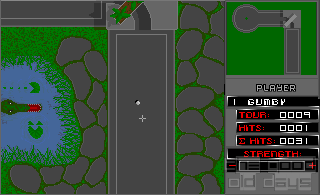