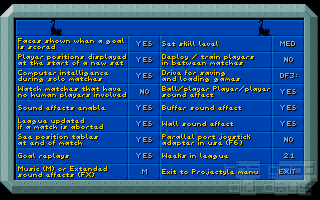 Team sports are all more or less the same: two opposing teams on some field trying to score more than the other. The method of scoring might differ a bit, but that's it. Relatively innovative computer sports games like for example Speedball started their changes at the same aspect: the way of scoring. Just looking at this, Projectyle goes the most conservative of all possible ways: 'players' have to 'shoot' a 'ball' into a 'goal'.

The game puts its innovation into something else. Instead of the usual rectangular field for two opposing teams, there are three teams at once fighting against each other on five different zones! Three teams? Five zones? It all makes sense when combined. Each team has a 'defense zone' in which its own goal is located. The fourth zone is some kind of 'chaos zone' with three goals - one of each team. They're all connected via a 'neutral zone' with no goals, but only gates to the other zones.

Each team has one player in each zone. These players can't move through the portals connecting the zones, only the ball can. So it is always a fair struggle between three competitors which can never quite work together, but sometimes have common goals. The neutral zone is mostly dominated by slightly defensive play to ensure the ball doesn't get into one's own defense zone. In a defense zone, there are two offensive players trying to score against one defender. Since only the team whose player touches the ball last before it's in the goal is awarded with a point, the defensive team has one advantage: the two opponents fight amongst each other mainly. The chaos zone (name by me) is exactly what the name implies: everyone tries to hit one of the goals, completely disregarding the defense of one's own.

To keep the game fast and open, it is not possible to carry the ball in any way. The players can only hit it so that it flies into the desired direction - but it can always be stopped by another team. Talking about the players and the ball, the teams consist of really strange creatures. The title screen implies they're just standing on floating discs, but maybe they're also all robots of completely different kinds. The ball is always presented in the graphical style of the home team (just like the whole arena, they all differ a lot), ranging from bubbles to metalic discs. As much as the presentation differs, each game plays identical.

That is more or less it. If you want to, you can also buy, sell and train players in league mode. That is really only secondary though. It is the tactical component through the addition of a third team and the clever construction of the field enhances the fun easily above the level of any 'realistic' sports game! Only that producing such a game requires imagination and not only an expensive license... 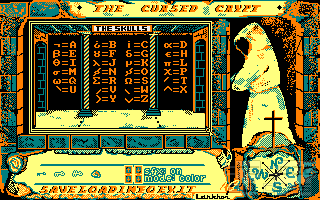