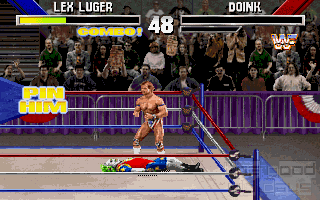 WWF Wrestlemania - the name says it all. The official license has both its advantages and disadvantages for the game designers. Much room for creativity concerning character design and playing modes does not remain, but these are of course advantages, too. Because well-known fighter “personalities” already exist to whom the followers of this “sport” connect different cliché attributes, the typically ridiculous plot of an average fighting game can fortunately not be found. Another point is that potential weaknesses of the playability will be easier looked over by the players because of the disciples' emotional link to their idols. The designers could therefore put all their efforts in a conversion as “realistic” as possible. 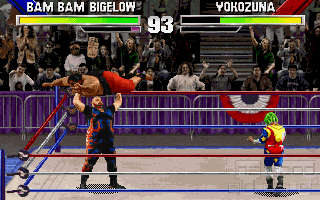 Altogether eight (then) famous WWF-stars can be chosen. They do not only differ in their outward appearance, but also in their abilities. That does not mean that they are real individuals regarding gameplay. It is more fitting to talk of groups of similar ones. The most obvious criteria is the antiproportional ratio between muscle power and speed. There are some differences in this, but on the other hand these are not huge. More important is the quality of the available moves. A certain superiority of the species “Pickup” (so named because of their ability to pick the opponent up and throw him down painfully) cannot be denied, for example. Compared to that, the standard punches and kicks of less priviliged wrestlers do not stand a chance. Because of this hierarchy there are already different difficulty levels depending on the chosen fighter.

Overall the number and practicability of special moves is really well done. While a few exotic moves are hardly possible in the hectic fights, the majority is relatively easy to use. Because of that really varied fights take place in which not only the same special move is repeated all the time. It has to be stressed positively that the handling of the different fighters is very similar to each other. If you have found an especially crushing move, you can be sure that the same combination of buttons will at least do something similar playing some other wrestlers. Therefore you are not bound to one fighter like in other combat games. 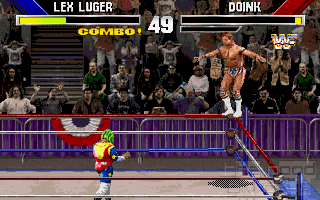 In contrast to that the number of available playing modes is less pleasing. For single players there are only the possibilities to compete for the Intercontinental or the World Champion title. And the ways to achieve these hardly differ. The only difference is the number of enemies. While there are one up to three enemies at the same time at the first title, the linear way to the second one begins with two enemies and ends in the so-called “Royal Rumble”. If you know this word from TV, you will be quite surprised, because in the game it is not a mass chaos battle, but it is just an only slightly modified version of what you experienced before. Again you have to fight alone against a union of three. Only that now every defeated enemy is replaced by a new one until you have beaten all seven “foes”. The lack of creativity is really obvious here.

The fighting has been converted to fun but it is not very original. Apart from the simple beating in the ring, you can continue it outside. But the programmers use a weird system here. Instead of following the “rules” (i.e. you will be counted out if you do not return to the ring in time), you lose energy after a short time, but only if the enemies are all in the ring. If one of them joins you outside, there is absolutely no difference to the normal action in the ring. Generally loved extras like chairs and tables to maximize damage are not available and neither are special fight modes like cage or ladder matches, for example. There could have been done much more here. 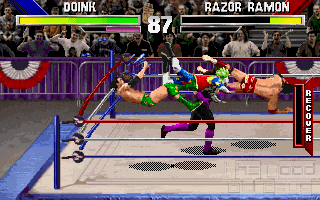 One of the most important points for fighting games is the multiplayer mode and the topic “wrestling” has much in it for that. Fighting against each other has been done with much routine, but it gets boring very quickly, because human players act too tactical in general. There is a coop mode, too. Unfortunately this one has been spoiled completely. It has been called “Tag Team”, but again this word is misused. It has nothing to do with the real meaning. The partners would take turns then. That would bring in a strategic component into the game. Just as interesting would have been the treatment of “violation” of the “rules” (illegal helping from outside, for example). But the programmers saved the time to think about all this. Instead, all fighters are in the ring at the same time (i.e. four on the whole) and the teams are supposed to fight. That is completely unplayable because of the lack of clarity (there is only one screen) and the fact that each team shares just one “Energy Meter”. More than two human players are not possible anyway.

What is left is a really motivating solo game which shows off with digitized graphics and authentic stadium- and commentator sound. To compete for a title and to try new things each time is fun. But unfortunately you get annoyed about the numerous missed chances. That is why this review sounds much more negative than the game objectively deserves. It is far superior to all fighting games in classical style (Street Fighter, Mortal Kombat,...)!

Moebius:
Oh right, right... sure, i forgot about that. Besides, those guys are in fact REAL GUYS captured on video and made into sprites for the game, and not simply drawn.. they all personally participated in this project i guess. I forgot that bit.
Mr Creosote:
I'm afraid all those names and characters are trademarked. Making an "all star – all times" game would be impossible without buying licences of all those rights owners

Moebius:
Actually, this very thought had crossed my mind too a few times, however.. i don't think that should've been the reason to deprive the game of good characters. Why does it have to go hand in hand with the current to that time cast of WWF?.. I think that's a flaw.. they should've made a universal and independent WWF game... and spared the unneccessary precision.
Mr Creosote:
Originally posted by Moebius at 02:35 on July 20th, 2014:
Also, i don't think it really deserves the mark 4 of the rating. I give it a solid 5.
Tough decision for me as well. What really prevents it from a better rating for me is the unoriginal game modes, in the end. It's always just you against an increasing number of opponents. Give me a real tag team mode, a Royal Rumble… something!
Quote:
I would definitely give it 6 if there were just a few more characters in the game, such as Hulk Hogan, Macho Man and The Warrior. For some reason these dudes weren't included, and Hulk alone was the legend of Wrestlemania, and he can't be missing here. Oh well, perhaps there was a good reason for it.
If I'm not mistaken (and I'm certainly no expert), those guys had all left the WWF at that time, and they were signed up with the competition (the WCW). I think this lineup is actually not half bad. All of these guys are still fondly remembered, no complete duds which were on a failed hype streak.
Moebius:

Amazing game, spent many hours playing it, and every time it was a great pleasure. Although, it may seem that it's a little too easy, even on the hardest difficulty (i would beat the game in every way), but something tells me if that were removed it wouldn't be as enjoyable. Dynamic, flexible, and quite relieving in times of fury

Also, i don't think it really deserves the mark 4 of the rating. I give it a solid 5. I would definitely give it 6 if there were just a few more characters in the game, such as Hulk Hogan, Macho Man and The Warrior. For some reason these dudes weren't included, and Hulk alone was the legend of Wrestlemania, and he can't be missing here. Oh well, perhaps there was a good reason for it. 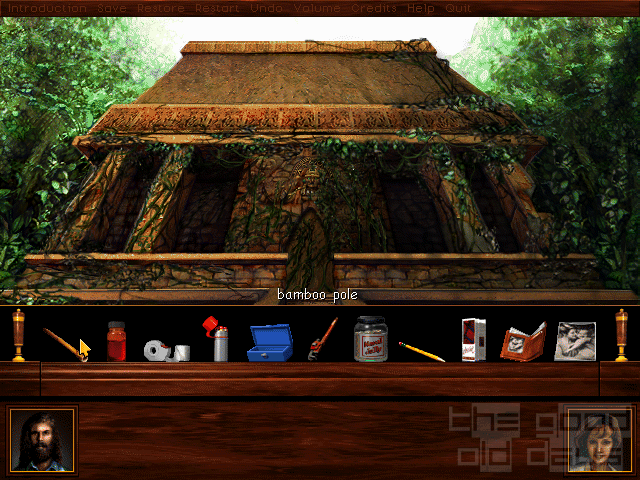