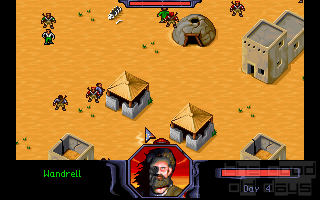 Flames of nuclear war devoured the world, cities, towns, forests... all became a desert filled with mutants and survivors. But you are not only that, you are a leader on its way to join again this land.

For that, controlling terrains is not the only objective, first you need food, and water. Each region produces a certain amount of water, and nearly everywhere you can get some insects, but that won't feed even a gang.

Technicians will solve this with traps, but you will need to defend the controlled zones with mercenaries, and also have some medics, as the wounds do not heal alone.

All of this creates the backbone of the game, searching for materials and food, hiring people with those items and securing control of the regions while looking for more food and water, unless you wish to die travelling.

Each of the map sections consists in some buildings or caves, where you may find objects or store them, some people, mutants, maybe dogs (good for hunting, but they don't respawn) and a waterhole, that sometimes is hidden around.

You just take control of them leaving someone, anyone, there. But make sure of giving them a weapon. Doing this (controlling zones, not handing weapons) serves mainly for one thing, cutting the way to the enemy, as he cannot cross any of the roads that exit the place, except the one he came from.

Once you have a protected zone starts the improvements, get all the junk you find around and store it somewhere, make a technician take a look and if he can make something he will tell. Traps, contamination protective gear, pumps and other useful things can be made from what you get lying around.

If not, you can always trade the things for other more useful pieces, weapons (that range from knives to shotguns) or just food. Some merchants travel around the map, while other can be found in the cities, along with restaurants, pubs and doctors (these are the ones that heal you when your condition is below 50%) that exchange their services for food or water.

Fighting is very simplistic, as you walk around you may choose talking or attacking the same as you choose going in group or alone and all the other options, right click and then left click on the selection. Then just walk to the enemy and click again, the group will go to their objective and hit it once, repeat until the death. This also will increase the experience of your units, making them better fighters.

The game is lacking in one thing, multiplayer. It is thought for that mode (the time bar will be always becoming shorter in one player), but only two people can play. The game can be fast enough for more players when knowing what to do and would do it much good.

Wandrell:
Feel free to share anything about Burntime (1993) here!
[Reply] 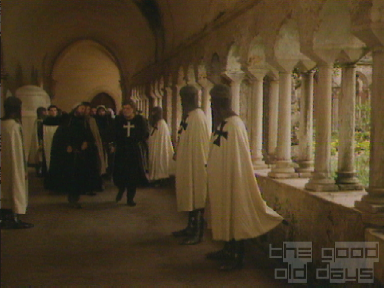