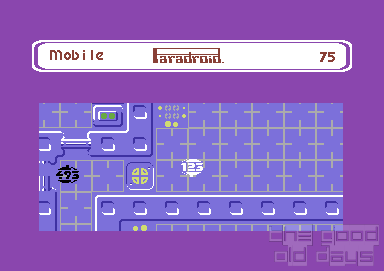 Deep in space, all the robots on a ship have gone mad, defying all human orders. The player has to 'clean up', destroying all the robots. Sounds like your average shooter? Then be prepared for a twist: You take control of a kind of 'meta robot' which will attach itself to any other robot to take control of its functions.

On one of the ship's decks, the player is thrown into the action with the 'naked' 'influence device'. It can move like any other robot and it's even equipped with a laser cannon. In theory, the ship could be cleared by shooting all the other robots, but in practice, that's not possible using only that very wimpy cannon.

Instead, the player can activate grappling mode and try to take over another robot. This activates a small mini-game roughly based on very simple circuitry and gate logic. Using a limited number of impulses within a limited time, the player has to try to 'colour' as many of the tiles in his own colour. The AI 'shoots' at the same tiles from the other side. Whoever has the upper hand when time runs out wins.

The number of 'shots' depends on the power of the robot itself. The stronger (identified by its number), the more, and thus the higher the chance of winning. Same for the player: Taking over another robot when from controlling a strong one is easier than letting the basic influence device (numbered 001, i.e. lowest) jump directly at the heavy hitters. Also, if the player loses such a 'battle' while occupying another robot, only that robot is destroyed. Losing a fight using the device 001 results in an immediate game over, on the other hand.

All the robots which can be taken over have different abilities (speed, weapons). The stronger the current vehicle, the easier the overall task gets. However, there's a catch: The influence device can't control robots indefinitely, and the stronger the robot, the shorter that time. So it's not possible to catch the strongest robot and just carelessly blast away after that. As burn-out is approaching, the player has to search for another suitable host quickly.

The graphics are surprisingly 'only' good. Everything is seen from above, the robots are represented by circles with their respective number on it. However, the smooth scrolling into every direction more than makes up for that. Rooms, doors, elevators and terminals (feeding the player information about the robots, the ship layout and such) enchance the overall feeling of a 'realistic' ship.

Paradroid is an absolute masterpiece. The keyword is balance: Where most shooting games restrict themselves to a linear path of upgrading weapons, the power is inversely proportional to the time it can be used here. So the player is always on the run here, jumping from robot to robot, always anxiously watching the remaining time until burnout. Not to be missed! 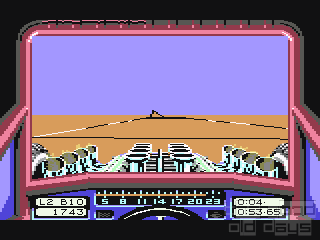