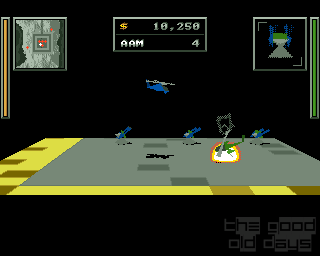 If a new company starts producing games for a system after it has become clear it's going to die is a sure sign of dedication. Binary Asylum had been founded by former employees of games magazines - after Commodore's bancruptcy. After this game (and its sequel), they never got any other release out again. Yet, the company showed that the Amiga was still there to deliver a good blast.

Zeewolf puts you into the seat of a helicopter in numerous 'real world' war missions. These mostly consist of destroying a few targets, with some rescue and patrol objectives thrown in. There are three weapons all of which have limited ammo, and all of which can be restocked at certain supply centres (often a carrier), but apart from the basic cannon ammo, everything costs money.

Graphically, the game is almost identical to Virus. The latter already had a few years on its shoulders when Zeewolf was released, so it wasn't that impressive anymore to see the polygon vehicles move over the patchwork ground, but nevertheless, seeing it live can still be impressive even today.

Like Virus, Zeewolf can be controlled with a mouse. According to the manual, this is even the recommended method for fast and fine-grained control. Quite frankly, I've yet to meet anyone who prefers this over the excellent joystick controls. Compared to Virus, the most welcome change is actually that the helicopter will automatically pull upwards if you don't do anything at all - but it also won't shoot up into space.

This saves the seemingly endless hours of frustratingly crashing into the ground. In spite of the different theme, it is essentially Virus done right (without the steep learning curve). Everybody will feel right at home in Zeewolf, and the missions get more complex gradually, thus providing quite a long challenge. The only real downside is that although it's an OCS game, it'll get a little slow on a stock A500. But who still uses an unexpanded A500 these days?

In fact, when the game came out and I read the reviews and saw the screenshots, I didn't understand what the buzz was about. That was until I played the game. Sometimes, there is a good reason (beyond the company backing the game throwing money around) why all reviewers agree something's great...

MarkTheMorose:
Easily one of my most favourite games on any system. Played like a dream on my Amiga 4000/030, now hoping it plays as well on the A500 Mini.
Mr Creosote:
Feel free to share anything about Zeewolf (1994) here!
[Reply] 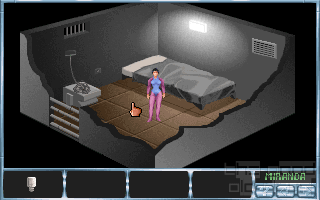