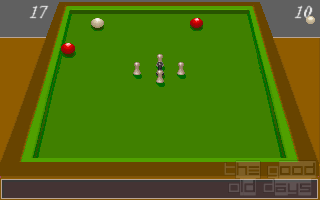 If nothing else, this game is at least noticable for its relaxed attitude towards the German language and its grammar and spelling rules. The game is full of goofey and daft phrases which the opponents let out, and which can't really be analyzed by the common rules. The game itself is basically also not very exact with its physics and its application in the field of billiards (which, in fact, is spelt Billard in German, so another clue about the groundbreaking knowledge of the German language of the programmer - see the title).

Still - and that's the relevant part - the game can be quite a lot of fun. Once you've got the hang of the idiosyncratic design and angle calculations of the game, and you've finally decided that the 3D view of the table might look nice, but it's completely useless to play decently, you can actually play a few good games. In addition, the games are organized in a well-done tournament system in which you play against opponents from different clubs depending on your amount of money. Each player demands a certain minimum bet and has a maximum, too, of course. The computer controlled opponents don't just differ in their skill, but some of them also have their own style and make their special mistakes. Altogether, this deserves the highest grade. This system, combined with the ability to save your own character (who is basically just defined by his name and his bank account), create a long term motivation lacking in many way more professional simulations. billiards wasn't my most-played game for several months without a reason.

billiards doesn't restrict you to one type of game. There are the options to play both the well known variants Snooker and Pool - as welll as four different obstacle variants. As for me personally, I had most fun playing Snooker, but each to his own. In the end, this game is a question of taste anyway. If you don't mind the crude language and the sometimes strange results of a hit, you can have lots of fun with it.

A small hint: The bar on the bottom of the screen can be magically activated by pressing 'Ctrl'. 'Shift' triggers a fine-tuning mode for the cue which is absolutely crucial when playing against opponents in stronger clubs. 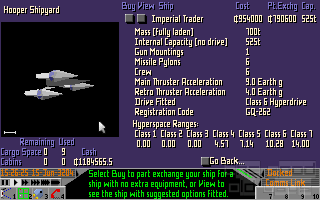