The Prophecy
for PC (DOS) 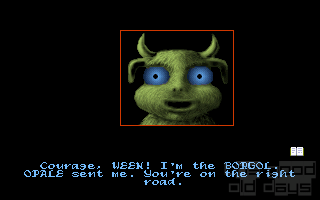 When your grandfather is a big guy on the wizard business, and also is working for the government, your destiny is sealed. Someday you are going to save the place because the old man grew too old and the bad guy came back.

I must say this is not the best adventure game I’ve played. It’s as linear as it can be, but they tried to solve it. With pixel hunting and absurd puzzles.

Yet the mood changes it all. While it still is a mediocre game, the exotic fantasy world makes it distinct to any other. Sadly it isn’t as weird as other Coktel games (try Legend of Djel if you want to know, it’s a prequel of sorts), most of the weirdness got swapped with quirkiness, but still has their distinctive style.

The game is of the “I’m a mage” kind. Changing the bronze ball into tools with the use of magic jewelry, or creating potions, or summoning the fruit loving magical vampire bat… Sadly, it is a mage that enters the room, looks around and then uses the components already on place.

Take for example the vampire, he eats fruit and then uses his magic depending on what he ate. But these fruits are always on the same room they have to be used, it’s like having a banner saying “call your bat”.

This is a general problem on the game, the lack of originality on the puzzles. And as you advance things worsen, as they start to get more absurd (and add even more pixel hunting). At least the game gas the decency of containing an in-game hint system, so you can wonder how the hell you were supposed to guess the solution.

So if you are going to play, play for the Prophecy’s world, filled with muppet looking characters and strange places. Really, it feels a waste seeing this fictional world used on such a game.

Wandrell:
Feel free to share anything about The Prophecy (1993) here!
[Reply] 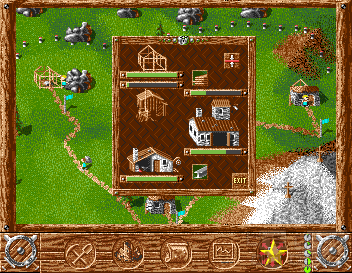