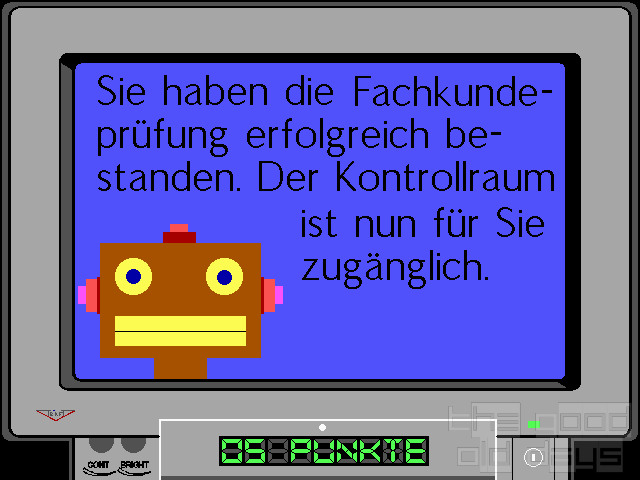 The seemingly everlasting topic of atomic energy has just started being discussed again in Germany... a good reason to examine this slightly dated, but nevertheless deeply meaningful and highly objective educational game by the lobby itself. Of course, being completely impartial and only having the best for mankind in mind, only the pure facts are presented in this vision of a future without atomic energy. 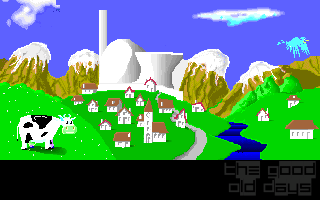 The idyllic present
From a completely neutral point of view, there can be only one conclusion: Such a future would be the horror! The country of Trubelland has fallen on hard times in the year 2055 as an evil wannabe-dictator called Schwitzig has bought all energy suppliers and is now controlling the prices. He has already started building up a private army. The population's only hope is an old, non-functional nuclear power plant. Unfortunately, with dumb politicians having outlawed nuclear power a long time ago, nobody knows how to get the plant running anymore. Using a time communicator, teenager Lena sends a plea for help to her past (i.e. the present of the game, 1996) where it is received by some young boy by the name of Philipp Fünfholz. Like every male teenager, Philipp can't say no to a girl and so he sets out to find technical documentation about nuclear power... 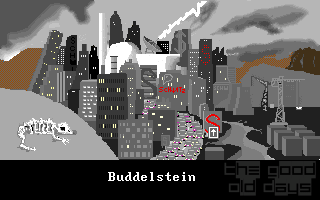 The horrible future (the power plant can hardly be seen anymore!)
If there weren't a company which actually admits to having made this game to this very day, one could think this to be a clever satire. Not only is the story completely (not in a good way) laughable (the problems attributed to the future aren't even related to the existence of nuclear power at all - the evil guy could just have bought those plants as well), but the game's technical merits make it look very amateurishly.

Graphically, the game is only just bearable (it looks better on screenshots than animated), barely reaching the standard commonly found in amateur games. The controls, however, are just plain horrible. Using four (inappropriate) icons, you select your action and then start wildly clicking around the screen, because first, there is no indication of what objects might be relevant and second, the cursors are so huge that it's hard to tell which part is supposed to be used to point. 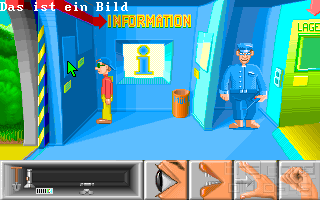 Oh, really, it's a picture? But what the fuck does it show?
The main problem is, though, that exploration has hardly ever be so little fun, because there is no reward at all. The game is narrowed down to its solution; any other attempted action is immediately stopped without (“That doesn't work”) or with a ludicrous reason (“I'm not allowed to watch TV”). Likewise, even doing things in another order than the one prescribed by the developers isn't possible. The game doesn't even make an attempt at explaining that: It simply tells the player he's still missing something before he can go to another location, for example. What he's missing isn't mentioned and it mostly can't be determined from the flow of the game. Usually, adventure games will let the player go somewhere in order to figure out what he's still missing...

This complete linearity doesn't even save the game from numerous bugs hindering progress. Sometimes, the player can progress without having done something the game expected - only to find himself in an unwinnable situation later on (without being told). Sometimes, it isn't possible to leave a room at all in spite of an exit being visible. And so on. 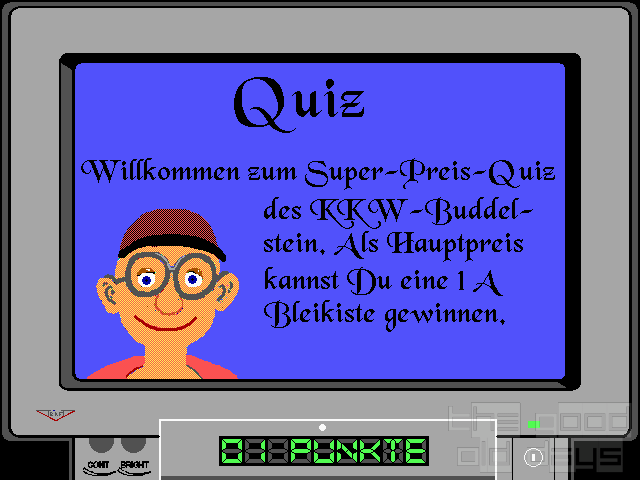 A lead box? What a prize!
Puzzle-wise, the player isn't confronted with anything out of the ordinary. Most solutions are simply spelled out by the game itself, though this doesn't mean it always makes sense. For example, the game assumes there is only one single kind of fuse used everywhere, it teaches us that cheap batteries last for several decades and that in the future, not only nuclear power has been banned, but also shovels. Computer virii can destroy data stored on write-protected media. Worst of all, though, many required actions remain completely unmotivated.

What's left to say? The promotial parts are bearable (mainly information concerning the technology behind the process; nothing you won't have heard in a regular physics class at school - the political dimension isn't touched upon at all), but still, the game promotes a despicable industry (still marginally better than promotial games for the military). The latter combined with the glaring technical incompetence of the game (of which this review can obviously barely scratch the surface) and the lack of any positive aspects leave no choice but to give the game the lowest rating available. If it had at least some moral or technical integrity, one could have mercifully called it something a little more.

Mr Creosote:
Quote:
The seemingly everlasting topic of atomic energy has just started being discussed again in Germany... a good reason to examine this slightly dated, but nevertheless deeply meaningful and highly objective educational game by the lobby itself. Of course, being completely impartial and only having the best for mankind in mind, only the pure facts are presented in this vision of a future without atomic energy. 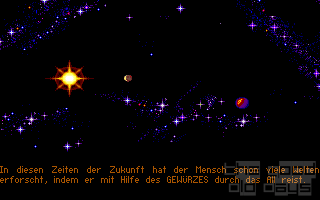