Car and Driver
for PC (DOS) 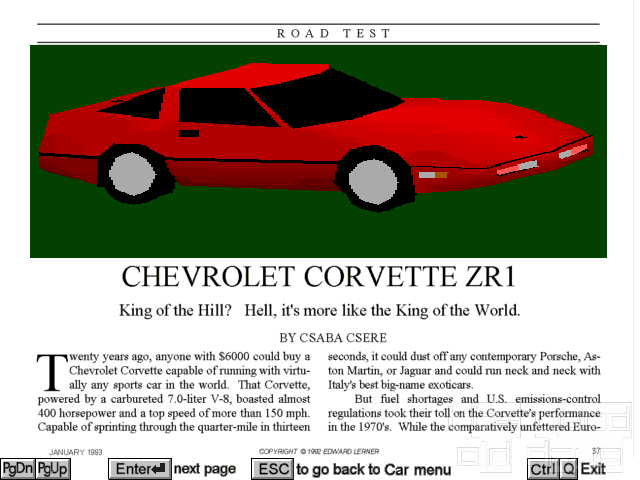 Car & Driver is indeed a magazine, but they managed to get a racing game out. When you go into the menu, it's exactly as if you were reading their magazine, except that it has the game's screenshots and some real pictures. It features 10 best cars and tracks with very nice range of variety. This is almost like Electronic Arts's prequel to their beloved Need For Speed Series.

This game is based on some of the cars covered in the early 90's at the time (not all of them but some sports cars are included) It features the Porsche 959, Ferrari F40, Lotus Esprit, Chevrolet Corvette, Toyota MR2, Eagle Talon, Shelby Cobra, Mercedes-Benz C11 IMSA, Lamborghini Countach, and a 50's Ferrari Testarossa. Very nice range of cars, but they could have included a few more cars like Ford and Honda or maybe the Jagurar XJ220, and a few more tracks like a whole town to explore and other working lights like reverse lights and even turn signals.

As for the tracks, there are a very good range of them. You have you're usual tracks and sprint races. However, there are a couple of unique tracks like an autocross course, a drag strip and yes, even a mall parking lot. Yep you heard that right, a mall parking lot where you can test drive your car and park too.

During gameplay, you can switch to so many views like the dash, the external view, first person view and also have views were you can be like your watching a replay but playing it, a top down view, and even a blimp view (like in super offroad). There's also a view were you can see the finish line. You can also play aginst real people by modem

This is almost a prequel to the Need For Speed series as you have your exotic racers and tracks. A very well done game with good graphics and nice variety.