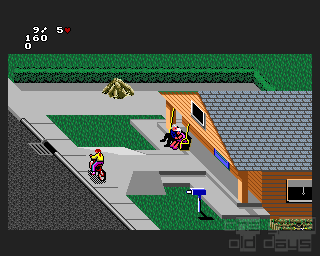 Paperboy... in the 1990s? Is it the long-awaited sequel taking the basic concept to new heights? In one word: no.

The player controls a paperboy (or, major new feature, a papergirl) on his/her round. Papers have to be thrown into subsribers' mailboxes (no stopping to stuff it in there) and new papers have to be picked up along the way, because why give the stupid paperboy enough papers for all subscribers if bundles of them are lying around on the street anyway? Which kind of defeats the whole premise, because why don't the subscribers just take their paper from those bundles?

Let's not quibble about the realism of a game which has cannons being fired at innocent children riding bikes, ghosts attacking, monsters emerging from the sewers and careless drivers running you over (actually, that last part is pretty realistic). This is just a silly little game in which you can try to fulfil your duty and - probably more fun - wreak havoc in more or less funny ways. You can break people's windows, trap people under their cars, have sunbathing girls sprayed with water,...

Though, to be honest, all that wasn't quite as fresh and fun in 1992 as it was in the mid-80s anymore. The idea had really begun to show its age and the whole game felt like a huge anachronism. The fact that the developers had changed almost nothing (the houses are now sometimes located on the other side of the screen - that's the biggest change) didn't help. It's the same old game with slightly updated graphics (compared to the home computer versions of the original). Not even good graphics for its time.

What's the point of this tired rehash? Certainly no artistic reasons. Surely it came way too late to profit from the brand name. So there is nothing. Not bad, but ultimately pointless. 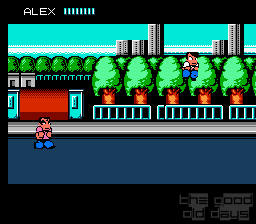