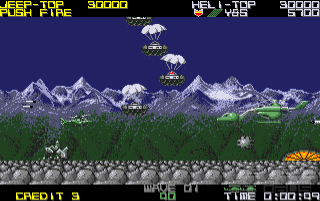 Silkworm represents a pretty popular genre on the Amiga. There were tons of similar games in which you were either flying, driving, walking or whatever and simply shot everything that came into sight. And this is almost everything that needs to be said about this particular game! The enemies are well done.

They range from tiny helicopters to huge missile launchers. But there are only two kinds of bosses. Smartbombs, invulnerability and some other extras also exist. A special feature is the coop-mode. Two players work together here. One flies the standard helicopter, the other one drives a jeep! Playing the jeep is far more exciting in my opinion because it's limited to faster/slower driving and small jumps. Much more concentration is needed to avoid being hit when controlling it.

Even though it's possible to play as the jeep alone, this is impractical. You just don't have a chance!

The graphics are well done. Even some fun details have been implemented, e.g. new helis appearing in the background before they actually meet you. But after playing some time, you'll notice that the landscape is always the same - only the colours change...

On the whole a good game, especially if you're looking for a two-player team game. Just add a little to the rating in this case.

I still have a Amiga 500. i don`t have a mouse and The keyboard are not working.
I m playing Silkworm, And it`s it`s difficult but fun with the Jeep, epecally if you have a helicopter player to help you. Log ago i completed the game many times. That`s because i used the cheat. Bun when doesn`t the keyboard work i m to trying to complete the game with the jeep. (Helicopter is too boring) I wonder what`s the problem whith the keyboard.
Rhe capslock light is flashing constanly. I can sometimes press one button on a game before caps-lock flash. (Like changing silworm contollers) I want a new Amiga. <:} 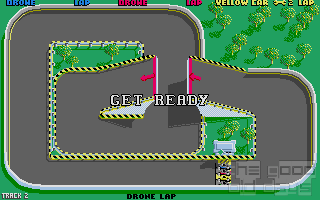