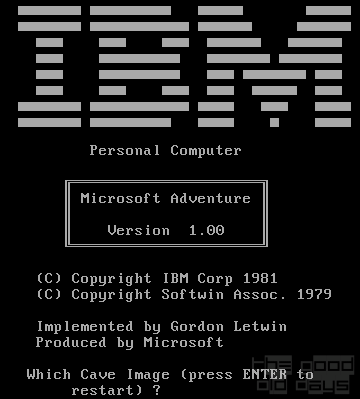 The game is a pure text adventure. It was developed by Will Crowther and it was extended with Fantasy elements by Don Woods. It was first spread over various university computers.

In the game, you have to explore a cave and collect several treasures. The story has been kept very simple (basically, there is none). Due to being the first of its kind, the text parser is still quite primitive and it only recognises few words. The cave to explore is a complex labyrinth. It is very unclear and complicated to draw a map of. Also, you've got a lantern, but it will only give light for a short time, strictly limiting the time to explore the labyrinth. Additionally, there are some random elements which will unavoidably lead to the character's death.

The game's puzzles are very, very hard, often, they make no sense at all, making it impossible to finish the game without a solution. For example, there are magic spells which only work in a certain room; often, you won't even know what the spell is for, so you will only learn about it by chance (if at all).

Like most of the early adventure games, there is a scoring system. At most, you can get 350 points, but you don't have to reach that maximum (which is extremely hard anyway). From today's point of view, Adventure's gameplay is abysmal, even compared to other early text adventures like Zork or Adventureland (both of which have been influenced by Adventure quite a bit).

Its historical significance, on the other hand, is immense. The founders of Infocom and Sierra played this game and it made them develop adventure games themselves. So this game had a larger influence on the genre than any other.

This version of Adventure was published by Microsoft together with MS-DOS 1.0. Nevertheless, it was published in a bootable format, not for DOS. It should nevertheless be possible to get it running in Dosbox. Gordon Letwin is responsible for this port and he tried to keep it as close to the Crowther's and Woods' original as possible. At least, this version allows you to save your progress to disk. The original version's source code had been publicly available and so there are many versions of the game. This one is one of the very first commercial ports to a home PC, making it one of the best known.

In spite of the significant weaknesses in the gameplay, the game must be recommended to all historically minded adventure players. So just take a look, but keep a walkthrough at hand to avoid too much frustration.

Wandrell:
I've played some bootable images with DosBox. Actually, that's what I've used to check the booters we have, but it won't work with all of them.
Mr Creosote:
I don't believe Dosbox is capable of handling bootable disk images. A general-purpose x86 emulator like Bochs will serve you better in this case.
Teset:
Feel free to share anything about Microsoft Adventure (1981) here!
[Reply] 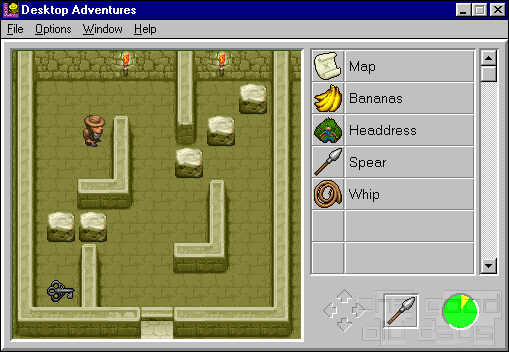