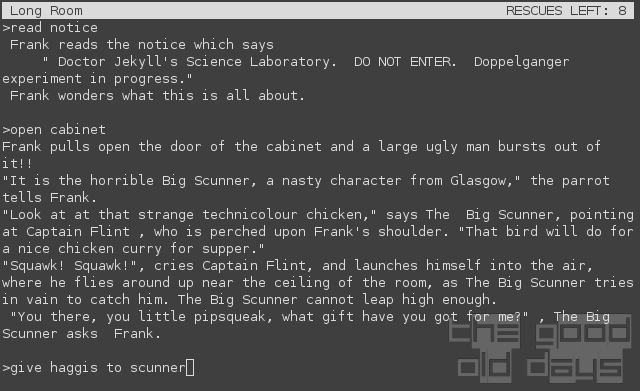 Professor Frank is an eccentric character to say the least. His interests are limited, he is clumsy and he is... Scottish. One day, when he is innocently sitting in the library, he stumbes into an unbelievable adventure without as much as some basic explanation.

Professor Frank (meaning the game this time) is totally unashamed of making no sense at all. It does not even provide the player with any hook to even try and get into this world. A plot-related incentive to start exploring is missing completely. Strange things start happening soon enough, but the game never communicates any goal to the player. Is it about escaping this library which, for unstated reasons, has been locked? Or maybe even more? No, it is less: It is not about anything.

Instead, the game tries to amuse the player withover-the-top situation comedy. This mostly works, but there are only few true laugh-out-loud situations. Most of the humour is based on self-conscious fourth wall breaking and references to proud Scotsmanship – like in those old adventure stories for boys which referenced something inherently Scottish in every other sentence.

Apart from the willingness to tinker with stuff just for the sake of it, enjoyment of the game requires the player's willingness to look aside from various instances of sloppy editing. While there are no major bugs, spelling and whitespace distribution are atrocious all over. Also, the game tries to have the narrative voice tell the story in third person, but this remains a half-hearted attempt at best; many parser messages retain the default second person perspective.

Gameplay is also not quite as good as it could be: Too many locked doors for which hidden keys have to be found. At first, it looks as if the door/key combinations will at least be colour coded, but even that has not been carried through. The fact that you can die, on the other hand, has been handled very fair: You get eight wild cards to get out of sticky situations.

So that's that; a game which wants to be played for the sake of itself. There is no plot, no coherent and logical progression. Professor Frank is just a hotchpotch of light-hearted jokes (most of which could be more original), embedded in gameplay which could be more original, too. It does not hurt anyone, but maybe a little more ambition will not hurt either next time. 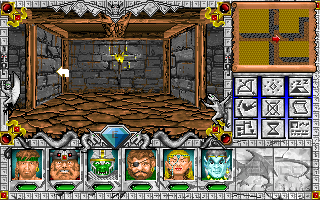