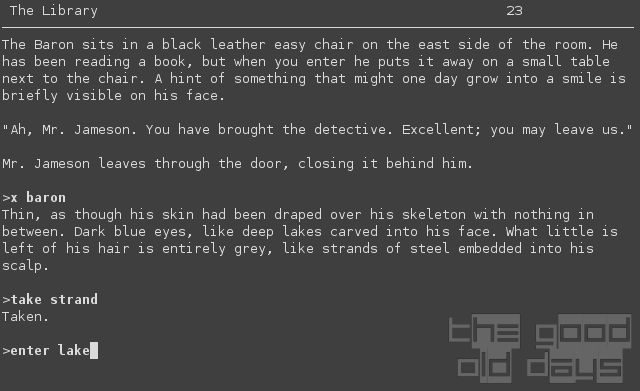 The stereotype hard-boiled gumshoe is hired by an elderly Baron (by proxy through his butler) to find his 'free-spirited' daughter who might have run away with a shady suitor. The Big Sleep, here we come! Though instead of delving into the dark depths which lurk beneath the surface of society, PataNoir is a game about language. In particular, it plays with one of the most common stylistic devices of the genre: something being described as being like something completely different.

The game's special feature is that it takes this vivid stilistic imagery literally: If a lamp gives light like a camp fire, there is also a camp fire in the room which can be interacted with. The revolver is like a trusty servant, so as long as you carry it around, you will always have someone to talk to (this character doubles as the in-game hint system). What the game does not seem to be completely sure about is whether the physical world can be influenced by objects from the imaginary world and under what circumstances; sometimes, this works (and is required), sometimes it is rejected.

This is strange, because it gets interesting when the two worlds overlap, i.e. objects from one have to be used in the other. In any case, after the initial enthusiasm about this novel idea has faded, routine sets in. The tone is surreal anyway, so whether the giant in front of the Baron's mansion is there physically or figuratively is not really important anymore. The same effect on gameplay could have been achieved by simply saying 'There is a giant here' as opposed to '...like a giant'. Talking about gameplay, while the interactions are sometimes imaginative, most puzzles suffer from the typical backward logic syndrome, i.e. they do make sense, but only in retrospect.

So we've got a gameplay device which gets old quickly and which the design depends on a little too much. Beneath, a solid puzzler is lurking which is somewhat entertaining and funny, but not excessively so.