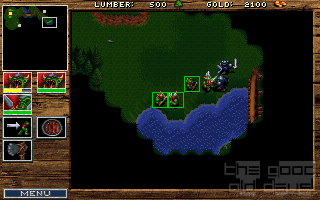 Warcraft is the first real time strategy game by Blizzard, a company which has become very famous by now.
At the beginning of the game, you have to choose between two factions. These are Orcs and Humans, each of which have their own campaign spanning 12 missions. After selecting your side, the battle begins.

The first few missions of each faction would probably be called the tutorial today, because they help to get acquainted with the controls of the game.
My main piece of criticism here is that the missions of the Orcs and those of the Humans hardly differ at all. The goals and construction is too similar to actually call them 24 different missions. The goal is mostly just 'destroy all enemy units and buildings to win'. A goal which suits me fine, to be honest.
Collecting resources, building up your base, recruiting your army and finally attacking – what more does a good real time strategy game need? Exactly, nothing.
Still, Warcraft offers a few… let's call them 'rescue missions' in which you cannot build any new units, so the provided ones have to do to reach the goal.

Let's talk about resources.
On both sides, workers are responsible for collecting resources. Both resources. In Warcraft, there is gold which can be found in mines, and wood for which the workers have to chop down trees and carry it to the main building. The more you gather of both, the better.
The aspect of building up your base has remained pretty much unchanged even in current games. First of all, you build houses in order to increase the unit limit up until the limit, so that you can build new farmers or fighters. After that, you build production buildings, like barracks, in order to recruit better and stronger units. Last, but not least, there are buildings like the smithy which can improve a unit's weapons or armour.

Units.
Regardless or Human or Orc, when push comes to shove, the units are not all that different apart from their looks. For example, as a Human, you have got knights at your disposal, while as an Orc, you send wolf riders into the field.
The most powerful weapon by far, and the one with the longest range by far, is, without a doubt, the catapult, which can be used by both factions. Its force is formidable, but it is hardly possible to hit moving targets. So you either have to lure the enemy into a trap or use it for curtain fire to make a bridge harder to cross, for example.
The biggest and most important difference only comes in later with the magical units. For example, Orcs can resurrect fallen warriors as skeletons while the Human clerics have the ability to heal wounded units.
Thanks to magicians and other spell casters, both sides get access to even more magical abilities. The spells range from taking a peek into unknown parts of the map to summoning powerful creatures which will support you for some limited amount of time.
On the whole, I think the Humans are a bit stronger. The main reasons being that their archers have a longer range than their Orc counterparts and their healing spell.

The background music and the sound effects are alright.
The story is told in cut scenes, although between the missions, there are no videos, but only the picture of a tavern with a scrolling mission text in the foreground. It does its job.

Controls
In my personal view, the controls are quite uncomfortable for the spoiled players of today. For example, you can only select and command four units at once. Even that is not possible by simply dragging a border around these units, but you have to use the mouse and the Shift key. It also is not possible to save grouped units and assign a key to them for quick access.
Similarly, you cannot just order a unit to go somewhere or attack something with a simple mouse click, but you absolutely have to use a command like 'move' or 'attack' before they will even move.

One of the game's biggest drawbacks is the limited AI.
The pathfinding routine is poor, units will sometimes get stuck on trees and will not be able to get free on their own anymore. All too often, your units will also simply stand around doing nothing while the enemy is attacking, because they are just a little too far away.

Although I really loved playing Warcraft back then and had a great time with is in multiplayer mode via nullmodem cable, I cannot recommend it anymore. For such a recommendation, or even a 'tentative' recommendation to at least give it a try, both the controls and the AI are simply too bad from today's point of view.

If you have the chance to buy the game including its manual for a small price, though, you should consider it nevertheless. The game will not become more playable, of course, but the manual is very well made and worth a look. It does not just contain very good descriptions of the units and buildings, but also a few very atmospheric pages serving as an introduction to the plot.

Back in the 90s, I would have given the game 5 out of 6 points, but today, it is only just enough for 2 points. Somehow, this is a pity, but in my view, it has not aged well, unfortunately. 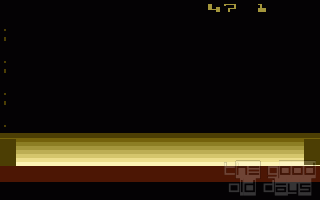