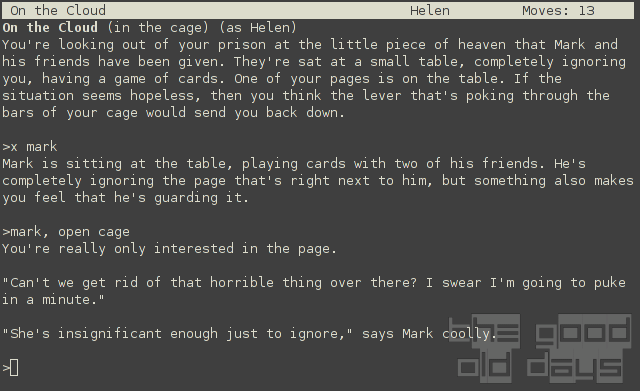 Oh boy… this one's going to be tough. Justin Morgan made, among others, the delightfully goofy and excellently implemented The Bible Retold: Following a Star, one of the best games of the 2010 IF Competition. This time, judging from the game's blurb, he tried his hand at psychological horror. Quite a thematical jump there! Or maybe not, as it turned out, there were more thematic links than anyone would have been able to guess.

Let's start with the good news: Spiral is once again excellently implemented and it employs some interesting game mechanics. The game starts out with the two protagonists, strangers to one another, trapped and helplessly bound in a train carriage. The player can switch between the two at will, and the actual game, the actions in the carriage being limited to thinking and remembering, takes place in each person's nightmarish dreamscape. The thing being: Although in separate 'worlds', the protagonists can help each other; they can not only exchange objects (which subtly change/adapt to their new mental surroundings in the process – a nice touch), but also some other actions will actually have an impact on the other's problems, like opening previously blocked ways. Often, true dream logic is applied in the puzzles. This gimmick turns out to be fun and motivating – very good marks for gameplay ahead!

Though we cannot avoid talking about how this game shows one of the major problems with the IF Comp: theming and symbolism. Why do several authors every year feel the need to dive into the realms of completely overwrought symbolism and heavily moralistic/preachy subjects? You see, both protagonists are burdened with guilt: Ross got involved with an environmental group which turned militant and he couldn't prevent a bomb from being planted and blowing up a full underground carriage. Also, his mother died somehow. Boohoo. Helen was somehow involved with a fundamentalist Christian group which dropped her like a hot potato when she got pregnant without being married. Oh, and she either lost the child through doing drugs or committed suicide. Boohoo, too.

Both dreamscapes are appropriately designed with respect to their own moral issues. Ross is stumbling through a world being destroyed by an all-consuming machine. Helen is trapped in an Inferno styled hell while a projection of her former religious friends are sitting above on a cloud ignoring her. Shades of I Have No Mouth, and I Must Scream, even in the goals: They both have to reclaim their soul/conscience/life by revisiting significant scenes of their lives, i.e. facing their fears and recollections they would probably rather bury deep within their minds.

Though the way this is brought across is just… overdone. Way overdone! Each and every location, every object, yes, even every single word used to describe something seems to be carefully chosen to 'mean' something. It's like a sledgehammer driving the points across! Points which, on closer inspection, don't even make a consistent sense in some places. Take Helen's problems, for example: She has been disappointed by the people she considered friends because of their religious zealotry. Her own Christian cultural imprint is still so strong that her own private hell is one styled in that mythology's imagery. That makes sense. Yet, the 'good' ending (as far as it is understandable – things get a bit muddled later on) is also built solidly on the beliefs of the same Christian mythology. Huh?

In general, it is a big problem that the Christianity does not seem to be limited to Helen's dreamscape, where it is entirely appropriate in the sense of everybody creating their own private hell, but it seeps into the other areas of the game as well, therefore taking a much more fundamental and universal role than it should. This could work if both people's dreamscapes would gradually begin to appear in each other's and on the 'neutral ground' of the train carriage. That would actually be very interesting, because it would take the idea of their connection tightening in the course of the game one step further. Yet, this is not the case – the symbolism works purely one way.

So, well, this is hard to say, but this is one of those typical overly moralistic games which attempt to tackle serious issues, but go way overboard in the process. It's not just sometimes that less is more! The fresh game mechanics could have served for an excellent game with carefully addressed issues. The way it is, it leaves the strong aftertaste of unnecessary preaching – which, considering what happened to one of the characters, is heavily ironic. 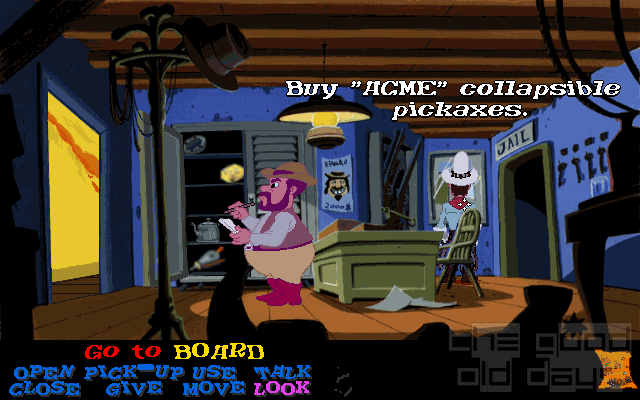