When your name sounds similar to Frankenstein, your life has problems of its own. The biggest, no doubt, is getting your girlfriend cut in pieces which now you have to find all around this huge and eerie castle.

This is one of those games clearly attempting some ideas the developers saw somewhere, thinking they could do just as good. In this case, they made a short of action-exploration game, in the same vein as Metroid II.

But you can't compare both games. This one tries, of course, it gives you a big world to explore, an easy to check map and even shows your objectives on it along the paths around, but this sounds much better than how it ends being done.

It misses key points, first communicating with the player. Doors are closed, sometimes even moving to a border of the screen makes the “door closed” window pop-up, and quickly becomes a nuisance, as there is no visual cue to know which key relates to each door, or which doors can be opened or not.

Still it is worse that the map fails to mark where there are doors to change to another section of the castle, making you lose a lot of time wandering aimlessly trying to find a path to wherever is the next item you need. Items that sometimes can be hard to differentiate from the traps that lay around everywhere.

Add to this that there is no save system (which nowadays is no longer a problem and playing the game can be a hard time, unless you don't mind getting lost easily.

And ironically that last point is the best thing on this game. At it’s core the game is well done, neatly animated, the room style helps to recognize the part of the map you are in and even if the enemies are not too complex, they don't feel so gimmicky as to offend (and sometimes they are very cheap enemies).

Still, the end result is a game to try and forget on the shelf.

While I have to admit that some of the longer passwords where annoying (especially if combined with clunky entering mechanisms), I prefered them to the save functions because of three things:

1.) You could trade them with your friends, meaning it was possible to "transfer" the "savegames".

2.) You could try to hack them. At least if they stored some kind of extra information besides the current level.

3.) You could have an unlimited supply of passwords, while most battery games used to have a maximum of three slots... and many of my games saw an early demise because someone overwrote my savegames.

And yes emulators are a real godsend considering saving. Especially for lengthy games like this one.

Well, I don't consider the password a save system, even if it's useful. I know that Gameboy had a lot of memory problems, and I think all the save systems they used had to keep the data alive with the help of a small battery, but still I always found passwords to be a nuisance.

Luckily emulators can save your current status.

I totally agree on this one: You seldom have a clue where to go, what to do and what that object you just picked is, or where it goes. Just picked up a pendulum? Well now you just have to remember in which of the about 100 rooms there was a clock...

Alltough it is tolerable and at least at the beginning the exploration is rather exciting. I really recommend drawing a map.

Quote:
Add to this that there is no save system

Actually there is a password-system, as far a as I can remember. And yes it helps a lot (for it is a rather lengthy game). 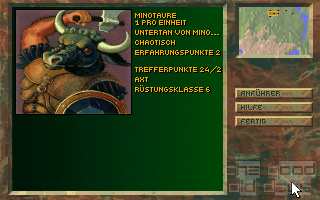