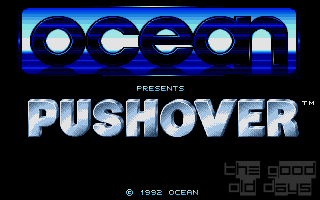 ﻿If you ever got your hands on a couple of Dominoes, you have certainly noticed that normally there are only two ways to play with them: The cerebral way, that is by laying down patterns according to a set of rules, and the fun way, that is by standing them next to each other in (depending on patience and skill) shorter or longer lines and then toppling them over in order to make them cascade. Pushover introduces a third option, which is as full of the childish glee of watching those pieces fall as it offers a stimulating mental exercise.

Mechanically speaking it is based on the second approach, the toppling part, which means you get lines of Domino pieces and have to push them over (therefore the name of the game). The interesting twist is that there are rules you have to follow in doing so, which makes this akin to puzzle games after all. First of all there are special pieces, that show different kinds of behaviours, when they are pushed. While the normal Dominoes just fall over and lie still, others either keep tumbling over and over, or take a certain amount of time until they topple after being hit, or split into two pieces, as soon as another one drop on them from above. Yet the most important Domino is the so called trigger, which has to fall over last in order to open up the door to the next level.

On top of that you cannot just take any piece you like and place it anywhere you want to, but have to navigate G.I. Ant, the name says it all, through the maze like levels and let him carry the dominoes on his back. Since most levels have some areas which are off limits to him, you have to plan your setup very carefully, always keeping in mind that you probably will not have full control over all of the pieces. At times you will have to do some shifting while the stones are already dropping, which turns things rather hectic, but also all the more exciting: Will you be able to outrun the cascade and put that piece you are carrying in front of it, or will you hear that pitiful sigh from G.I.?

Besides dropping all of the pieces, the trigger as the last one and being able to reach the exit, you also have two kinds of limits: For one you only have one push per level. If you fail to get all of the pieces into a horizontal position in one go, it is restart time. Same goes for number two, the time limit. Even if you managed to do everything right: If the clock turned red, because you ran out of precious seconds, you will have to try again. Finally, you should also avoid getting crushed or fall from too much height or even from the bottom of the screen.

As for heights or, to be more precisely, your surroundings: Besides the Dominoes there are only platforms and the occasional ladders connecting them. So it is just you and your stones, there are no enemies or (obvious) traps to annoy you. To keep things fresh the levels’ themes change every 11 levels, that is you get a new backdrop (e.g. moving from a industrial to a medieval or oriental landscape) plus a new tune to hum along your rearrangements. The colourful graphics and the cheerful melodies are perfect to lighten up the atmosphere.

So the gameplay stays a bit simple, but also focused on the actual puzzles with some slight action sequences when a good sense of timing comes in handy. And as simple as the concept might be, it is actually effective: As mentioned in the introduction, making a couple of stones fall one after the other offers some entropic delight, especially when combined with a goal. It is quite engaging to come up with a perfect plan, which turns out to need yet another bit of extra tweaking. And nothing compares to that sweet moment of triumph when, after trial and error, G.I. Ant finally waves at you with his happy fanfare and you set out to run for the level’s exit.

With its 100 Levels it is a rather long game, that will keep you busy for quite some time. Yet, it is also a good thing that there are so many, because almost all of them have just one solution, so their replay value is rather limited. Luckily there is a password system too, which means you do not have to retread all of the starter levels over and over again until you finally manage to beat those mercilessly hard ones, which need lots of creative thinking outside of the box. Funnily the latter seem to turn up totally at random, some of them even as early as the 30ies. On the other hand most of the last ones are surprisingly easy.

The huge amount of levels might make you wonder whether you will get invested enough to get this far, since there are only so many ways you can set up the pieces and things might get repetitive. But do not be afraid: The developers created a nice bunch of levels that offer lots of variety. Of course there are some tricks you will see dozens of times (like multiplying cascades or the unstoppable tumbling stone), but for every run of the mill level there is at least one of them that either puts your reflexes or your brain power to the test… or at least is simply entertaining enough to simply watch unwind.

Finally there is one aspect of the game I had not noticed in all those years of playing it, until I did my research for this review: It was sponsored by a snack manufacturer. One of the (two) characters in the game is a dog, who is the mascot of a brand of crisps. The story of the game revolves about him losing all of his snack packs, and you have to crawl down your ant hill to go and retrieve them. What has that got to do with pushing over some Dominoes? Your guess is as good as mine, but it makes for some nice cartoon animations of the two of them jumping in joy after finding one of the packages at the end of certain levels. And since that is all of the ‘advertising’, it is comparatively unoffensive.

To sum things up: Pushover gets my full recommendation for being a unique puzzle game that offers a nice challenge for your brain, while still avoiding the typical pitfall of the genre, namely being overly dry, by wrapping up the puzzles in an enjoyable scenario. It is also very easy to pick up and does not take that long to master. With some very rare exceptions it plays rather fair too and in all those years of playing I did not spot a single bug. If you are a puzzle fan and a bit tired of the same old Tetris or Soko-Ban clones you should give this one definitely a try. 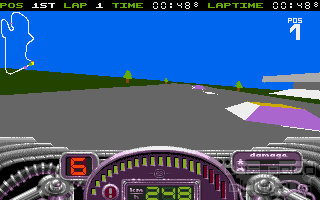