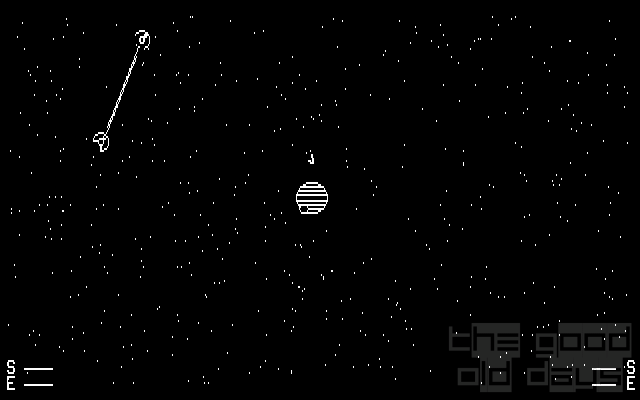 Spacewar (or SpaceWar, Space War or Spacewar!) is one of the first computer games ever. Some say the very first, but even though the line between funny tinkering and actual games is of course blurry in those early days, that's not entirely true, because Oscilloscopes had already been 'misused' for simple 'tennis' games back in the 1950s. Stephen Russell wrote Spacewar for the PDP-1 in 1962 - more than 40 years ago! The PDP-1 was a luxurious computer for its time: it used a cathode ray tube as display and could be used pretty much like the PCs we know today (compared to the earlier IBM computers at least).

So, even though Spacewar can't take credit for being the first computer game, it was groundbreaking in many other aspects. The inital keyboard controls proved to be cumbersome, and so the first computer joysticks were built. Some versions of the game were even controlled by a kind of trackball, an idea which computer mice are modelled after to this very day.

The game presented here is a PC port made in 1985. I'm not sure whether it's a commercial, 'official' port or a fan project (anyone?). It sticks very closely to the original: two spaceships are battling each other in the surrounding of a planet, being pulled by its gravity. They have two weapons, lasers and missiles, they can temporarily activate a cloaking device to turn invisible and they can enter hyperspace to escape from their current location and turn up somewhere else again. Whoever succeeds in blasting the opponent wins.

There are a few enhancements and options. First of all, the planet's gravity and even the planet itself can be turned off, which effectively makes the gameplay less complex and more focused on the duel. Some additional complexity has been imported from the famous Atari 2600 version released in 1978: The ships' energy is divided into shield and weapon, and the player can control how it is distributed.

Last, but not least, the ships can be set to be computer-controlled. Seeing how extremely dumb such ships behave, the single player mode is pretty much unusable, though. Very unfortunate. So don't let the rating fool you either way: Spacewar is still a good multiplayer game, but don't expect it to be any fun if you play it alone. The latter has never been intended, though, so it's really great to see how well this game has aged!