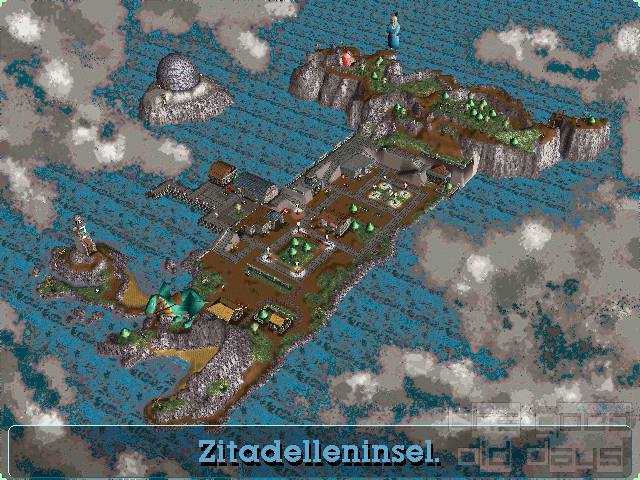 Little Big Adventure 2 (known as Twinsen's Odyssey in America) is the sequel to Little Big Adventure, made by the developers of Alone in the Dark. It is an action adventure and the gameplay has hardly been changed compared to the predecessor. Nevertheless, LBA2 manages to outmatch it in every respect.
Once again, you take over the role of Twinsen. After defeating the evildoer FunFrock in the first part, there is finally peace on the planet. Only for aliens to arrive with an unknown agenda.

The game world is inhabited by lovely characters. Amongst the different races, there are the hare and elephant-like beings known from the predecessor, but there are also new alien races, like sausage and mole-like beings. What makes the game special are the numerous small occurences which don't immediately contribute anything to the main plot. For example, there are some older men playing boules on the side of the road or there is a car race taking place. It is these odds and ends which make the world come alive. Something which is sorely missed in many newer games. Humour, too, is not missed out.

Most of the puzzles can be solved quickly with just a little thinking and the fights still play a big part. Compared to the predecessor, the world is not quite as hostile towards our hero, making exploration much more fun. Even the game world on the whole is much larger.

Mainly, the biggest weaknesses of the predecessor have been addressed. For example, there is finally a decent option to save the game and you will not suffer damage from running into a wall. Also, the voice acting has been conducted by professionals, so it does not sound as amateurish anymore.

What remained is the predecessor's controls. The hero is controlled completely by the keyboard, like in the predecessor. This makes the controls similar to games like Resident Evil, just that the camera is always on the hero and not fixed in place. There are four different 'moods' again: 'normal', 'athletic', 'aggressive' and 'careful'. These can be used depending on the situation. This works relatively well, but it is quite antiquated from today's point of view. It would have been better to simply have one key for sneaking, one for running and one to draw a weapon. An action like talking or searching an object can at least be triggered by a single key stroke in LBA2. It is not necessary anymore to switch back to 'normal' mode.

Graphically, the game has been improved a little bit. Inside buildings, it still uses the isometric perspective, but the outer world is shown in 3D. The camera position, however, cannot be moved freely and it gets a little confusing at times. Mostly, it works well enough, though. The music, on the other hand, is very good.

The game's biggest weakness have to be the fights which, unfortunately, make up its biggest chunk. This is because after being hit, you will be stunned for a moment, enabling the enemy to hit you again. So it can happen that you lose most of your lives in close combat quickly if you don't manage to score the first hit yourself. This also works the other way around, however: The enemies can't defend themselves anymore if you manage to score subsequent hits.

The most used weapons isn't your fists, though, but (like in the predecessor), the magic ball which you can throw towards your enemy only for it to return to you. Due to the controls and the camera perspectives, aiming is not trivial at all. The first throw will almost always miss its target. However, the enemies, too, are not particularly intelligent.

Still, the game is worth an unreserved recommendation, because the weaknesses in the combat system are more than made up by the other aspects, especially the lovely game world.

On newer PCs, some errors can occur, but the game runs without a hitch under DOS, for example using DOSBox. 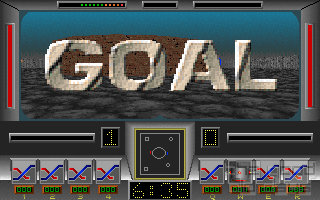