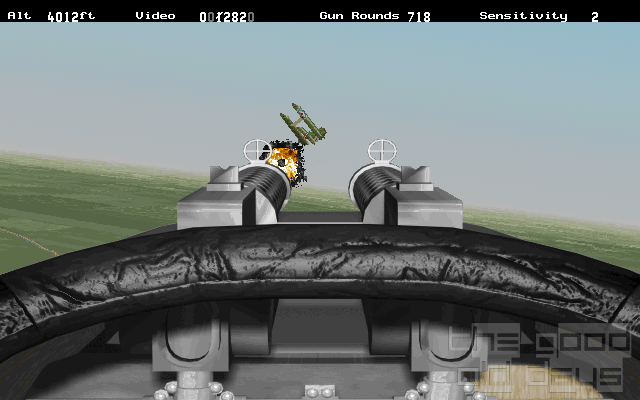 It's 1916: a hundred years ago, the First World War had been raging for two years already, but it was only just beginning in the air. Before, whenever formally enemy pilots had met by chance, the worst thing that would happen was that they'd take out their pistols and shoot at one another before they went their own ways again – more often, they probably just waved. The introduction of mounted machine guns synchronised with the propeller changed all that; for the first time, it enabled actual dogfights between planes.

Dawn Patrol tries to appear like a documentary of that time with a little bit of game woven in for good measure. Instead of plain menu selections, you flip through the pages of a history book which covers different subjects which, in turn, are divided into chapters. The macro level allows to relive a part of the war from a different perspective: either globally, by fighting in noteworthy battles, specialising on a certain aircraft type or jumping into the shoes of an actual, historical flyer. Whatever the choice, a set of freely selectable missions then awaits to be fulfilled. Those then being recorded for later playback in the style of a aerial war propaganda newsreel. This package certainly helps the game scores some points. The introductory texts about the people, the historical course of the war and technical details about the planes seem well-researched and definitely are well-presented.

The flying itself, on the other hand, can hardly escape mediocrity. Graphics are alright, but painfully slow in SVGA mode. The horizon is visually severely limited by a permanent strange fog. And all missions are basically the same: shoot down a couple of enemy planes. Sometimes just like that, sometimes to defend bombers, but both play the same; the bombers may be there, but you cannot give them commands or otherwise communicate with them (or with wingmen in other missions). Speaking of bombers, since there are no possible ground targets (absolutely no 3D objects to be found), of course there are no bombing missions to be carried out by yourself. Oh, and missions always begin and end in the air, so no starting or landing, either. 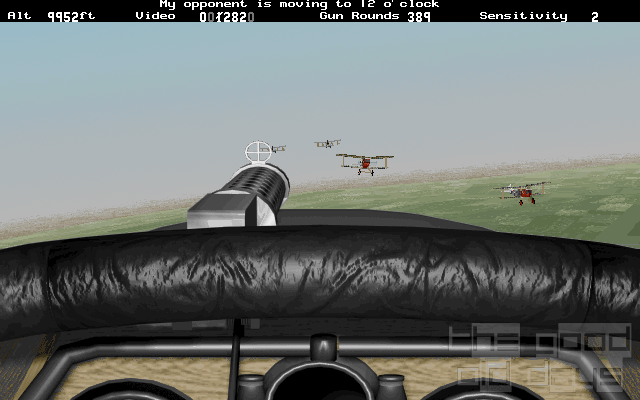 The planes basically all handle the same (kind of ironic in a game which has an aircraft model centric playing mode). Their turning rates and other characteristics have not really been visibly adapted. The only difference is really the static cockpit texture occupying the bottom half of the screen. Space which is wasted, because it serves no gameplay function. For example, the altimeter, along with some otherworldly information – like an ammunition counter – can be found textually on top of the screen instead. More unreal flying support features can be enabled as well.

By default, the game will also display hints about the heading of the enemy planes top. Good choice for playability considering that radar hadn't been invented yet. Nevertheless, an awkward way of solving the issue; mostly, it will make you appreciate the elegant way Wings handled this all the more. Speaking of Wings, between the pages of Dawn Patrol, there is of course no place for a fictional plot acting as a connecting thread between the missions.

You see, Dawn Patrol's biggest problem is not any of its own features. Its flying is both graphically and handling-wise alright. It's the prior existence of clearly superior alternatives which make this game so unattractive. It's a by-the-book production, but nothing more.

Unless that was an irony, of course.
I'll leave that to your imagination

Unless that was an irony, of course.
[Reply]