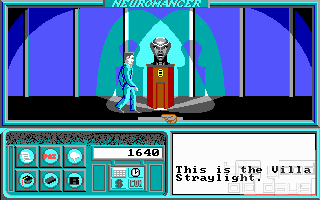 In the 1980s, William Gibson co-founded the Cyperpunk genre with his book Neuromancer and even today, he still belongs to the canon of SciFi authors absolutely worth reading. A certain Timothy Leary – LSD guru of the hippie generation, visionary and “psychedelic researcher” – put the idea of adapting the book towards the developer Interplay, excited by the new capabilities of computers and the fascinating idea of the Internet. After first versions for the Amiga and C64, the PC finally got its turn in 1988.

The protagonist is called Case, and he uses his hacking abilities to survive in the real world. That world looks rather unspectacular in the game, save for a few floating police robots, and leaves a lot of room for the spectator's imagination to actually transform these images into the dystopian metropolis Chiba with its dangerous underground world and Japanese luminous advertising which does so much for the book's atmosphere. That is where you need money for such unnecessary things as food or a bunk bed in a cheap hotel opposite of the red light district. Also, the Internet connection just eats credits. Nevertheless, you should not give in to the temptation to exchange your body parts for plastic replacements to make some money. Real puzzlers will rather (under time pressure) visit mailboxes and blackboards of different underground organisations to try and hack into them with their deck – a kind of archetypic portable computer.

A good part of the real puzzles are hidden in those avalanches of text which you encounter surfing. So you better be a friend of the English language. Using passwords, stolen IDs and illegally downloaded software packets, you hack your way to the big money. And like a real hacker, you give beautiful women and fast (hover?) cars the cold shoulder and rather dive right into real cyberspace with your brand new deck Samurai Seven – your money is not yet sufficient for the even better mega equipment Ono-Sendai Cyberspace V11 and you will only receive the ultimate Cybereyes towards the end of the game. From now on, each entity in virtual space will also be represented graphically and only after breaching the security software – called Ice in the game – they can be accessed. Here, you will not just encounter counterparts of the real world, like our Cheap Hotel or our employer Hosaka, but also intrude into the well protected KGB or the Bank of Zurich Orbital.

Well, up until here, it is just a vision of the future which has more of less become reality and is therefore as interesting as yesterday's news. Though the story doesn't end there, of course. Basically, the rest is about the battle against an artificial intelligence called Neuromancer (hear, hear, who would have thought?) which has grown in cyberspace and now takes influence on the very foundation of the world, affecting also the life of protagonist Case. So the player falls into the Terminator effect; he feels like the lone hacker facing the unnoticed, shady threat alone to become humanity's saviour and hopefully regain his own salvation.

The deep plot may help you get over the very strongly aged graphics. The sound consists of a motivating MIDI theme which activates itself in appropriate scenes and often startles the player deeply involved in his puzzling. Explicitly, I have to say you will not get a point and click adventure, although the game does have a mouse interface. The gameplay elements mostly consist of exploring and exploiting the connections between the (textual) world of the cybernet on the one hand, and later the rather action-like breaching of the cyberspace actors' protective ice. The real world around the protagonist takes the backseat more and more towards the end, just like the real experiences of some computer junkies living in their dark room in front of the PC, surrounded by pizza cartons, living primarily in cyberspace.

For those with an affinity towards the genre and particularly the ideas of the book Neuromancer, this is a real gem to explore.

arcadialyon:
Ah Neuromancer.....lots of fo d memories of playing this game on my Amiga 500 as a kid. Thought it was so advanced compared to anything I'd played upto that point. Ofcourse then again, my only other system was a sega master system so...
LostInSpace:
Feel free to share anything about Neuromancer (1988) here!
[Reply] 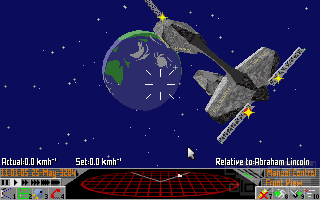