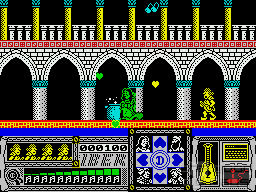 If I had to describe this game with just one word it would be simply “AAARGH!”. But later to that. Ahem. Thou art Casanova, the infamous venetian dandy and the legendary playboy of the XVIII century. Who knows him not? Alas, in this adventure thou art not to seduce and conquer more and more damsels despite thy highest expectations, but rather tend to the consequences of thy many practical jokes, knavery, heresy and fornication. As ye sow, so shall ye reap. Tonight is the night that thou flee from Venice and avoid contact with some of thy old “friends”, vexed customers and besotted wives.

Casanova is an action platform game from spanish label Iber Soft. It's loosely based on the historical account of Casanova's flight from Venice. In the actual story he had to escape from prison first, which he did together with his fellow convict Father Balbi. The game was ported to Spectrum, MSX and Amstrad CPC with little difference made except Spectrum as usual outcolours the other two. The game exhibits lush and high detailed graphics, buttery smooth animation and unusually luxurious design featuring small-scale simulacrum of Venice and nicely done characters which for Spectrum standards hits the top altogether. Only there is one problem, which, I believe, plunged this game into obscurity: it's ultra merciless which makes the rest a bitter waste.

You start in the east end of the city and have to move west. Your primary job is to collect something looking like bras (we don't really know if Casanova had such fetish) scattered all around and it may take a while to locate every single one of them. You can use hanging chains and ropes to climb buildings, move between floors, walk on top of the roof, jump between balconies and leap to other buildings (not that real Casanova was a stuntman, but it's true his escape was rather unusual). The city consists of three islands acting as game levels which are separated by canals. You can't leave an island unless you collect all the bras, in which case a boat will appear in the very west end allowing you to move on to the next island / level. Meanwhile you must watch out for the enemies which is the ultimate agonizing challenge here. They constantly pursue you and fling various things at you which sometimes fly past but are mostly fatal. You can either run or if necessary zap them with your magic lute shooting musical notes (Casanova never really played a lute, only a violin).

Let the nightmare begin. You can never stand still cause your enemies are always coming and you just have to move around quickly. Unsettling. The enemies come as four only, but frankly, even one would suffice, as losing tail or evading their projectiles is mostly impossible. Your lute can be pretty useless too, cause your enemies often get you sooner than you can pick the string. Moreover, the notes are finite *AARGH!* and on top of it all your energy bar, which is merely a substitute for time, wanes little by little and if completely devastated... *AAARGH!!*. Though, all of it can be restored by collecting spaghetti bowls dropped down in giant eggs by birds, those only appear at a few screens of each level, let alone they don't always drop eggs and you may have to re-enter the screen several times for better luck. And the last crowning annoyance: if you die you always begin at the initial screen of the current level *AAAAAARGH!!!*. Thank god it doesn't send you all the way back to the first level, which at this point would no longer surprise me.

Obviously, the game is a little ruthless. Believe it or not, I used emulator's snapshot feature to save and restore and even so I almost lost and came to finish with my only last life. That was close. Without a single doubt, this game is made for uber humans with the nerves of steel and lots of free time. To make it playable for normals you have to remove AT LEAST ONE of the AARGH's I've highlighted, cause the only reason I saw the end of it is the emulator. And no, Casanova never escaped by a flying balloon, though I appreciate the idea. 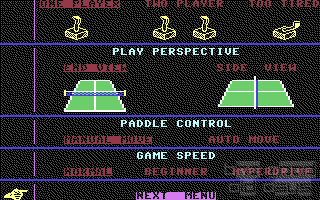