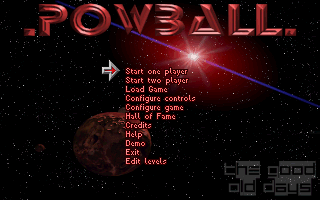 Another bat, another ball, another wall to break. You've seen it all before. In fact, PowBall is really just another boring “breakanoid” and it offers nothing particularly groundbreaking except… new cool sets of colored brick layouts, new awesome animated and sound effects, a greater variety of enemies, extra bonus levels and an incredibly vast selection of weaponry! Plus, now you can use two players which, for all I know, is totally unprecedented. Wow! Guess it's not all that trivial after all! However, what really distinguishes PowBall is that it was made by my good old friend Anthony Hamilton from UK using C++ environment.

The initial beta release of PowBall came around in 1996, and what came out in 2000 is a many times revised and finalized version. Meaning, it still much better agrees with mid 90s in terms of graphics judging by low-res sprites alone, which though to me isn't a stark disadvantage. Besides, for a one-man-made game this is quite excellent even for 2000 and nit-picking would be rather inappropriate. Suffice it to say, graphics, animation, sound and overall dynamics of the game are pretty smooth and solid to the very present day and this game is not just playable, but actually quite enjoyable!

The game's theme is set in dystopian future. Your playground is space, the bricks are space rocks and your paddle is really a MN-23 mining vessel. As a “Rockhopper” your task is to procure a special sort of mineral known as alchemite (blue crystals) which is somehow essential to survival of mankind. Once again, your task here is to break all the bricks, collect as many alchemite crystals as you can, collect ammo, various powerups and coins. You don't get weapons while on levels (except extra balls) and can only obtain them by trading your coins every once you complete a level, which is a new gimmick introduced by Anthony. Initially you are armed with 6 balls and a twin cannon loaded with 100 shells, which, though, must be used frugally.

Now for the really new stuff. Each time you complete a level you get onto something like bonus stage, where your paddle turns into a shuttle craft and you begin to fly vertically while avoiding & blasting down the coming asteroids using your cannon and collecting uncovered alchemite which technically makes PowBall two games out of one. On completion you visit a weapon store where you can finally apply your coins. The weapon selection is unusually large and overwhelming, ranging from various cannons to grenade launchers. While in a store you can also save your progress, which is a pretty cool feature. Besides lives here you also have an energy bar which wanes on collision with asteroids when transiting from level to level. Speaking of transition, it is also accompanied by really impressive 3D animation sequences of a shuttle flying back and forth through space.

A few words about the gameplay. Turns out the greatest challenge here is to constantly keep an eye on the ball(s) while also tending to falling crystals and coins. Furthermore, the ball tends to mingle with the brick/rock debris making it almost indiscernable which doubles the struggle. There are 100 plus 35 secret bonus levels here. Most of them are custom made sets submitted by various people during the years from 1996 to 2000 who volunteered to contribute to PowBall project using in-built level editor. By the way, the game works fine in DOSBox, though, for some reason I failed to get the audio working.

In conclusion, I'd like to say, that this is probably the coolest and most sophisticated breakanoid game I've ever played. It offers amazing graphics, awesome sound effects (which I failed to hear but know are there) and a great overall design. 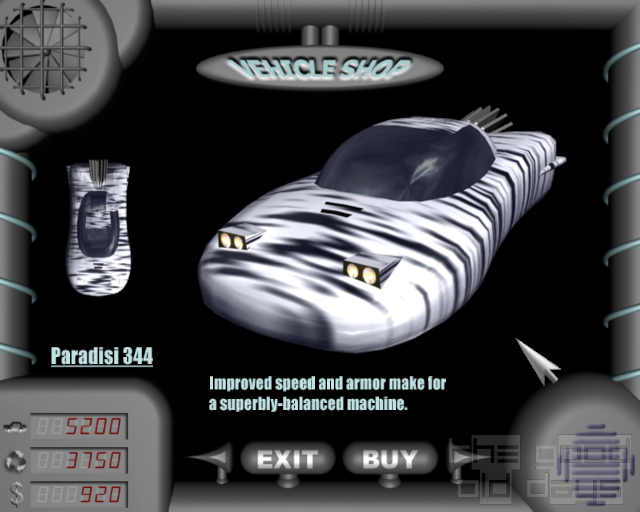