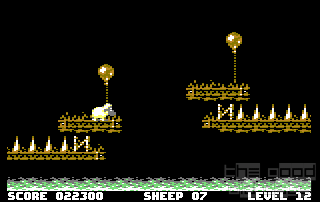 Sven Bømwøllen, or simply known to others as Sven the Sheep, was a running party gag at the beginning of the new millennium (at least in Germany). Far away from the serious gamer scene, this crazy PC game gained a lot of attention with its droll way of controlling the sheep Sven during his numerous rolling in the hay sessions. Woolly Jumper adds even more craziness to the story: the game presents a dream after the consumption of psychoactive mushrooms in combination with alcohol from the point of view of a sheep called Pepito.

This dream turns out to be a horizontally scrolling platformer and enables our peace-loving sheep to even shoot at attacking aliens. These inhabitants protect the “mind-space” planets which Pepito was beamed into. A river flows under each of the 16 levels, and Pepito is always in danger to fall down during its numerous jumping manoeuvres. But instead of waking up by dropping into cool water, Pepito loses one of his 3 lives. This can also happen by touching the UFOs flying around in a formation of four or some spikes sticking out of the ground. The individual levels are relatively short, but nevertheless tough.

The permanent scrolling of the screen hardly gives the player time to remain on one of the platforms, otherwise the sheep will be swallowed by its border. At the end of a stage, a whistle appears with which you can summon a rescue spaceship that carries Pepito to the next level. It is an oddity that no goodies such as coins or diamonds are distributed in the level. Points can only be scored by shooting at the alien formations or picking up equipment. This falls from above at various points. But beware: while the upgrade for better shooting power is urgently needed, you should carefully avoid its “evil” counterpart for the downgrade back to normal strength. The transgression of 5000 points through successful shooting is rewarded with a bonus life.

On his way through the 16 levels, Pepito wanders through 4 planets with their own characteristic design, each consisting of 4 levels with different colours. This programming trick creates an individual look for all levels without changing the used design elements. There is the world with the balloons, which is supposed to reflect the craziness of the dream. Then there's the snow level with ice-covered platforms on which you fortunately can't slip and furthermore a slaughterhouse ambience with meat hooks, which is apparently meant to symbolise the horror of the dream. Finally, there is a stage-design overloaded with barrels, which spreads a kind of warehouse romance. For even deeper interpretations, you should also notice the level headings that are displayed at the beginning of each stage. In those ways, the effort to make each level unique in some way is visible. 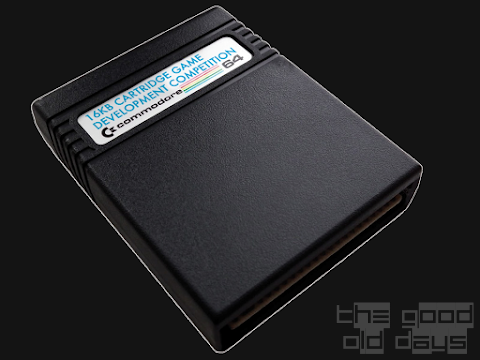 They are well-matching with the funny animations of the aliens in their UFOs or the small splash fountain during the occasional fall into the river. Some of the accompanying music sounds a bit like nursery rhymes, while in other levels you can hear perfectly acceptable SID tunes. The used sound effects are quite awesome because they are a bit reminiscent of early Super Mario games.

The control responds directly and can be dosed well. Never the less no pixel-perfect jumps are required. The gameplay is more action-oriented due to the need to jump and shoot at the same time. Thereby always in danger of crossing the border of the scrolling screen. The extreme minimalist graphics suit well for this fast-paced gameplay in my opinion. To complete the game, you are supposed to have fast reaction-skills. The effort is rewarded with a funny end sequence.

The core of the present game was originally an entrant in the C64 16KB Cartridge Game Development Competition 2011 hosted by RGDC. To pass the restriction of the competition to use only 16 KB of memory for the whole game, various programming tricks were used. Woolly Jumper ended up in the 6th place. In the following year, some promotional elements were added and this commercial version was released. So jump into your woollen jumper and let the woolley jumper do some jumping-action for you. 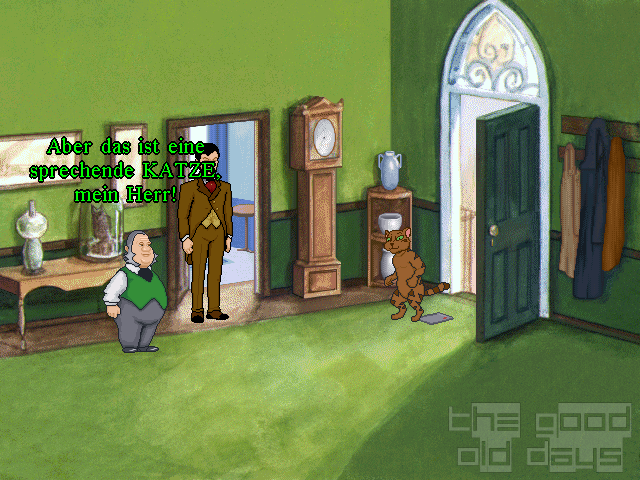