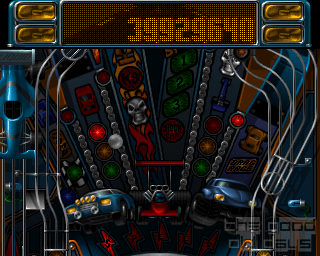 Since they had struck gold with their pinball games, publisher 21st Century also had other teams than the original one developing “more of the same” for them. Slam Tilt goes back to the old standard of four tables again.

Mean Machines: racing car-themed pinball machine which is a little overloaded with different targets and therefore leaves a busy impression. The Pirate, on the other hand, offers just the right balance of immediate gratification and interconnected, more complex events which keep you playing later on. Ace of Space is a well laid-out, but somewhat one-dimensional challenge. Finally, Night of the Demons basically consists of a large empty space in the middle and four ramps at the top which not only have to be hit at exactly the right angle, but also with full power to have the chance to trigger anything (though even then, usually nothing spectacular will happen).

In summary, there is once again one dud among the selection, one which is really good and two are sort of hanging in the middle. The typical extras like side paddles, multiball etc. are of course there. Each table also has at least one mini-game triggered by a (series of) target(s) which is then played on the score board – a car race or a light sabre duel are represented by simple mechanics like fast tapping of buttons. Nothing world-changing.

The tables are all very colourful and lightning-fast – could be considered too fast depending on individual abilities and taste. Each is accompanied by its appropriately-themed soundtrack.

So, really, there is nothing to complain about. This is a very good game once again. However, looking at the series, nothing new had really happened since Pinball Fantasies, the second part. Basic game mechanics, ball physics – same old, same old. Some additional colours, but the graphics were still displayed in the old low resolution and the fast, smooth scrolling didn't impress anyone anymore in 1996. With no innovation in the pipeline anymore, it was no wonder Slam Tilt marked the end of this line. The pinball genre crown moved on to other producers.