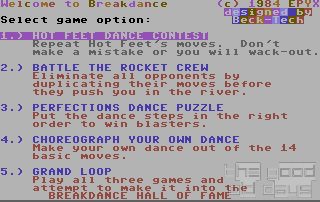 The 1980s obviously were the cultural high point of humanity as a whole. However, it has to be admitted, not everything which came out of that decade was great. For instance, there was Hip Hip, Rap and Breakdancing. Urk! Now, if this is my view on this “phenomenon”, what qualifies me to review a game called Breakdance? Nothing, really; I do it because I can. Oh, and we're really committed to show the dark sides of classic gaming as well (phew, last minute excuse).

The first thing which would be relevant in a game about dancing (apart from the dancing itself, which I'll get to later) obviously is the music. Unfortunately, this game only has one single track which is not even appealing. At least it does have a usable “beat” which fits to many of the possible moves, so it fulfils its main purpose.

So, about the “dancing”. The game directly translates joystick movements into certain “moves”. The basic game mode has the player memorize and repeat the series of moves made by another dancer – i.e. it's basically a Simon variant. Then, there is another challenge which is quite freaky. An approaching line of dancers will push the player into the river if he doesn't match their moves (huh?) which makes them pop like bubbles (HUH?). Then, there are some freestyle modes where the player can simply choreograph their own dances.

Not even all joystick directions are used, so the repertoire is fairly small. This, as I learned from the most ridiculous Wikipedia article ever, even includes moves which should not be there:

Quote:
The term “breakdancing” is also problematic because it has become a diluted umbrella term that incorrectly includes popping, locking, and electric boogaloo, which are not styles of “breakdance”, but are funk styles that were developed separately from breaking in California.

I don't think there is a better way to illustrate how ridiculous this whole affair is than finding an article which, above everything else, talks primarily about petty terminology differences. Welcome to the Judean People's Front! Or is it the People's Front of Judea? 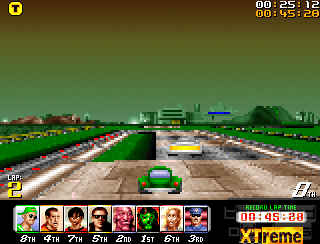