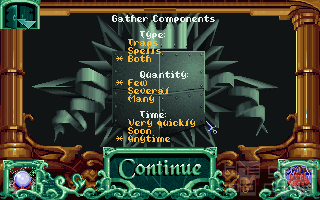 If the history mankind has shown us one thing, it is that seemingly all-powerful empires will fall eventually. Their power depends on many psychological factors. Among them, the disunity of the people they rule over. Once those manage to ally, the sated, tardy and overly bureaucratic empire suddenly isn't so invincible anymore. 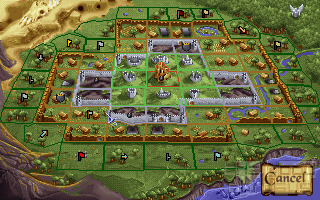 The funny thing about conventions of gaming is that in such a set-up, it would be universally assumed to take over the role of the “rebel” faction. Which makes sense, because giving a player the initiative promises a lot of potential reward. The reverse role of defending may not be so rewarding. If you start at your height of power, things can only take a downturn.

Dominus is one of the very few games which forces this basically thankless job on its player. “Winning”, in this game, equals not losing too much. How can this possibly be made in a fun way? If you think about it, there is actually quite a nice strategical challenge behind. Interestingly, the tactics you need to defend are not the same as you would typically employ in games which put you in the attacker role.

In practical terms, the game shows the threatened realm on a nice map divided into sectors. The different factions send their raiding parties to get themselves some of the wealth. First, they will only attack the outskirts, which are predominantly used for agriculture. This “outmost ring”, logically, is quite large and defending it completely may just not be possible with the limited military resources available. Next, villages may be attacked. If those fall, stronger fortifications may become targets as well. Defensive ring by ring, the enemies advance until they will finally enter the huge fortress where you can make a final stand if necessary. 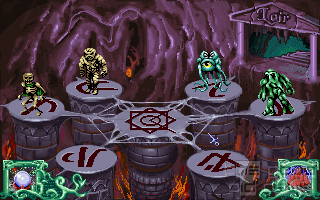 Now, it doesn't need to come to this, of course, because the player is not defenseless. An army of monsters is at his disposal. Four generals are available to command them. Though it is, of course, not nearly sufficient to counter all the raids. The sheer number of invaders is too large. Also, the monster soldiers are not exactly the most efficient ones.

So the game becomes a balancing act between short-term actions (“stop this specific raid”) and long-term strategy (improve the defensive capabilities). For example, the player can build and deploy traps and use magic to weaken the enemy armies, but ingredients/material for those needs to be collected first. So how many soldiers should we send for those duties vs. sending them straight into a fight? Keeping in mind that if certain sectors are lost, access to some natural resources may be cut off permanently in the future, weakening you globally once again.

Another pretty neat feature concerns a sort of crude genetic engineering of the soldiers themselves. Available monsters can be magically crossbred to create new mutants which may combine the strength of several ones, while slowly eliminating the respective weaknesses from the gene pool.

Though in the end, none of this will suffice if the enemies remain united. This is where the last big gameplay feature comes in: instead of killing invaders, you can try to capture and interrogate them. Depending on the strategy applied, you may get more or less new information about their own war strategy, their goals, their relation with other tribes… all of which can be used against the enemies subsequently. For example, if you learn a specific tribe is afraid of a certain monster type, you can increase the efficiency of your defenses dramatically by deploying the right creatures in the right places. Or you can even try to sow some seeds of mistrust within the shaky alliance of your enemies… 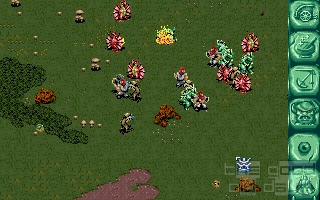 Battles are fought mostly automatically. The player can decide to deploy creatures by himself, but they will then act autonomously. Magic spells offer a direct way of influencing the outcome. The other, more desperate way is to have the player's avatar fly in on his magical chariot himself. This sprite can then indeed be controlled directly and it is a pretty strong character; though if he dies, it's game over immediately. Indeed, this strong automation is necessary, as the game takes place in real time and unless you've already been pushed back into your citadel, you wouldn't even be able to command every battle personally even if you wanted.

So overall, Dominus does a very good job of making the unusual strategic role worth playing. The hectic gameplay causes quite some positive stress in the early game. Though of course, it is not without its limitations.

For example, the cross-breeding feature could have been taken much further. It does not work “recursively”: newly created mutants cannot be further developed by combining them with others in a next step. With ten basic monster types and up to six “input” slots, there is a good number of new creatures to be created already, but it's nowhere near “endless”. And if the number is already limited, why couldn't those possible ones at least have had an individual sprite each?

Another point is the repetitiveness of the interrogation mini game. The prisoners show little personality, so once you have figured out the right way through the “conversation maze” which got you the most out of a member of this specific tribe, you can basically apply it again and again – but you still have to perform it manually every time, which finally turns into a somewhat tedious routine chore.

Other than that, however, there is little to fault Dominus with. The fresh concept alone is enough to cut it some slack as far as some minor deficiencies in execution go. If you have any interest in how the computer would feel playing against you in other games, this one is a great recommendation! (Well, if a computer could feel…) 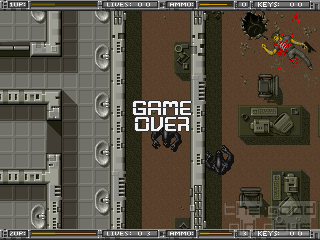