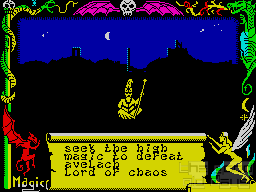 The Dark Ages are closing in. You are a wandering lore-seeker in 5th century Britain. Oh look, you've been given a magical staff and a map, and for some wild reason you must now travel to Isle of Glass (Avalon?). There at the foot of the Glass Hill you shall dispatch your soul underground into dismal dungeons to remotely locate and banish Avelach the Lord of Chaos, who according to this old witch's prophecy shall soon bring down terrible calamities and the end of the world as we know it. Firstly, though, you must overcome his perplexing maze and its ghastly denizens to prove yourself a skilled sorcerer and a worthy opponent...

Avalon is one of the very first 3rd person action/adventure games to see the light and apparently Spectrum had pioneered in this genre somewhere in 1983. The game was conceived by Steve Turner, the author of Seiddab Trilogy (3D Space Wars, 3D Seiddab Attack, 3D Lunattack) and published by Hewson Consultants. It is also the first game on Turner's list to feature a solid adventure component, and is probably the best one too paired with the followup Dragontorc. Regarding the very name, there is little connection to Arthurian legend other than pale allusion in the game's official introduction. No Arthur here, sorry, nor the knights of the round table.

You play Maroc the Mage or his floating astral projection to be precise, who departs down into the mazey dungeons just a few feet below the Glass Hill. The dungeon is divided into several levels stretching deeper underground and your primary task is to arrive at the downmost level where the Lord of Chaos himself resides. In the meantime you must explore the maze, seek out keys to unlock doors and various magical spells to assist and protect you against various creatures lurking in many of the dungeon rooms. Doesn't it remind you terribly of Heavy on the Magick? Only Avalon is obviously a precursor and probably the original model for such type of games.

Some of the objects can be found lying on the floor while others must be retrieved from chests and other containers which may too require some magic, keys or miscellaneous corresponding devices. On each level there are special doors which take you inside a tunnel leading up or down (you can never know as you always move upwards regardless) where you must avoid spiders and bats coming your way as well as stay clear of the walls. Your energy depletes on contact with bad elements or the use of certain spells and can be replenished either with ENERGIZE spell or using remote means.

Almost everything in this game is done with magic. Even moving around is technically a magical ability which is the only spell you possess by default. One of the few things that don't require spells is opening doors - they fling open as you push them (if unlocked, of course). Only two of your spells are permanent and impactless - MOVE and SERVANT, whereas others will eventually drain and dissappear from the list or take advantage of your energy. You may uncover lost spells again, but in the meantime resort to alternative.

Some spells are useful at all times like SERVANT which is really something like a familiar spirit acting as a medium between you and various other objects. Fetching, dropping, using things together - all done with SERVANT. It is essentially a substitute for Maroc's physical hands since his astral body is practically immaterial and cannot act upon things corporeal. I've got only one question though: how come with such excellent property he is still unable to, say, penetrate walls? Or why is he affected by anything at all in this game? What a glaring contradiction!

Your enemies are 4 different classes of malevolent beings: goblin warriors (two types), guardians of chaos, wraiths and warlocks, who may also come in groups. You can either combat them with magic (cast various bolts which are enemy specific too) or simply avoid contact by moving past them quickly. Bad news: these things will follow you all around and it's pretty difficult to loose them. Good news: most of them can be permanently disqualified, they would never respawn and pester you again. However, going on a killing spree is not advised, as it is always risky and most of your spells are finite except MOVE and SERVANT, so you ought to be wise.

Warlocks are a special case. When you stay long enough in a room they peer through walls (unlike you they CAN do it!) and may hurl bolts at you. However, instead of killing them you may offer them a trade in case you have something they need. In return they will vanish leaving a present. Why, two birds with one stone!

As you get farther in the game and gather more spells (and certain special items) your rank is promoted which may also become crucial in the final battle with Avelach. Hmm... ranks again. Didn't we have it in Heavy on the Magick and Phantom Club? Again, this is probably where it all started... in Avalon!

Let's observe some of the most severe challenges (and downsides) of the game. First, you can't do two things at a time. So if it's, say, SERVANT then you must stop, toggle your magic list, switch from MOVE to another spell, execute it, then do the reverse in much the same fashion as in the earlier reviewed MOVIE game, which is a rather annoying and stressful routine. Moreover, your spell list can grow enormous and scrolling up and down makes no sense, cause your spells never scroll in the order appeared, which is the only thing I don't really like about this game. I mean, why? Is this to produce a rummaging through a spellbook effect or something? Well then, it's really redundant to say the least.

If suddenly met your enemies start to follow you and it seems there is also a little bit of cheating involved. Like they tend to appear in the doorways a little too soon as though when you leave a room they secretly use hyperspeed to catch up with you on the other side. To throw them off completely you have to be like two rooms ahead of them or use a tunnel, which isn't always possible cause you may run into a dead end or a locked door. In situations like that you can only resort to more magic: either kill them or use other spells likes FREEZE, UNSEEN or SHIELD.

Doors can be a pain in the butt too, for it also takes good aiming to push them open (especially if in distress), otherwise it may appear as locked which is irritating as hell. There are few safe spots in the game where you can loosen up, but most of the time you have to MOVE and that is the biggest trial to undergo. After all, this game, like many other Spectrum adventures shares a good deal of pure arcade action and if you're a real Speccy fan then it is something you should be used to.

Now for the really good stuff mostly unexpected. You don't exactly die in this game, only return back to where you started. You retain all the spells and items you have collected, the doors you unlock will remain so and the monsters you killed will stay out too. Moreover, you can save and load your progress any time you want, which is a great relief. Looks like things aren't so bad after all and beating this game is not a lifetime's work!

Finale. Notwithstanding great age, transparent objects and flickery animation, this game is very unique, complex and fairly time consuming. It takes a while to learn how things click exactly, let alone good survival techniques. There are over 200 rooms to explore on 8 different levels which seriously calls for a map. I think for a '84 game it's not too shabby and more than just catchy. Granted, this arcady bit of it can be a pain in the neck, but it's also what contributes to thrill and adrenaline, and that I would never change. At the end of the day, for this game to be good as it is, it HAS to be a little tense. 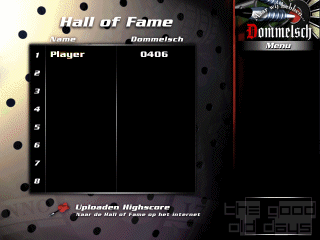