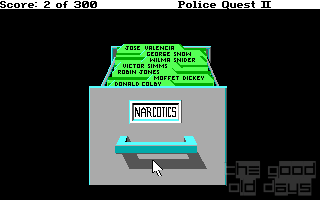 Just a year after releasing Sierra's masterpiece Police Quest: In Pursuit of the Death Angel, they released the follow-up to one of their finest series, Police Quest II: The Vengeance.

Luckily, for the Sierra fans amongst us, 1988 was also the year Sierra started using the SCI engine for their games instead of the outdated AGI engine. This was a good thing since SCI, although requiring some heavier hardware, had a better scripting system and supported higher resolution and actual soundcards. So, no more earbleed-inducing sounds coming from that internal speaker!

The story continuous where PQ1 left off. Sonny Bonds is now a detective at the homicide division and happily hooking up with former hooker Marie Wilkans. So, things finally seemed to have worked out after locking up big shot crime lord Jessie Bains, or have they? Things are about to get seriously messed-up for our Detective when he receives the terrible news about the escape of Jesse Bains from prison. And believe me, this bad boy is a bit ticked off to say the least.

Now PQ2 seems really influenced by some of the popular police shows from that age. It's almost as if you're playing an episode from Miami Vice. The game itself is presented with quite an adult theme. No, not because of any nudity, but think more in the lines of kidnapping, murder, revenge and even a stereotyped terrorist attack that will make its appearance.

The action in the game is pretty much a roller coaster of hardcore police operations. One minute you barely escape getting hit by a car, next thing you know you're diving in a lake looking for clues. No time to dry your hair, because suddenly you're boarding a plane to chase after the suspect. It's the great diversity of the crime scenes you enter and the role you fulfill in them, that makes the game unique. PQ2 has a great variety of locations to offer because, hey, crime does not confine to one single location. You'll be visiting the park, the local mall, a sleazy inn and the airport to name but a few of the more inviting areas of Lytton.

You'll start the game with following up the leads on the escape of Jessie Bains, who happens to have kidnapped a correctional officer along the way. Who says men can't multi-task? From there you basically have to follow the trail of mayhem that's left by our main antagonist. The puzzles are mostly straightforward, even though it might happen on several occasions you will ponder on your next move. If you’ve gathered enough evidence however, things should be clear on where to continue the investigation.

You’re also presented with some mandatory police procedures and sadly, sometimes they’re absolutely required. You get to use the police radio, gather evidence samples and more importantly, flip your badge around to show civilians how tough you are.

Another cool, but potentially punishing activity is using the shooting range. You need to brush up your cowboy skills there and try to puncture a target as adequately as possible. In fact, miss the shooting range and your gun won't work properly, thus keeping you from finishing the game and forcing you to break down, cry and restore an old save-game. Yes, Sierra can be ruthless from time to time. But they give you something great in return.

Occasionally along your adventures, your co-workers might aid you a bit with their advice. You've got Keith Robinson, your nicotine addicted partner (it was the 80's after all), Fletcher Hall, the captain of the office and a crowd of other characters that you either need to interact with, or that you can decide to ignore. In fact, for the fan of the series, it might actually pay off to learn more about the other people around the station. With the use of Captain Fletcher's notes and a computer, you can dig up some interesting information about your co-workers. For some particular persons, you are rewarded with points for helping them out in their ordeals. Other bits are just fun to read, who would have guessed for example, that Laura Watts was the tormenting “gremlin” from PQ1!

Just don’t expect any fancy NPC movement here. They are just statically scripted in the game, trying to bring some life to it. It does make you feel you’re not playing alone though. Keith follows your every move and more than once you need to get assistance from other departments. Also, you'll meet lots of familiar faces from the previous installment, but if they'll live up to Police Quest III: The Kindred… Personally, I think the NPC part works seamlessly. Especially for that day and age.

Speaking of that day and age, this was the Golden Age of Sierra and PQ2 certainly had a major upgrade on all levels. The animations became a lot more fluid, the overall artwork was far more elegant and the support of soundcards really brought the game to life. And you got to hand it to them at Sierra, the soundtrack is amazing. From the cinematic intro, the tear jerking tunes when you enter Marie's house or the nerve-wracking sewer part later in the game, they all bring out so much more and it certainly adds to the immersion. All praise goes to Mark Seibert who used a Roland MT-32 for recording the tunes.

All in all, PQ2 offers a well written script in terms of games. It plays like a cop TV show or a crime movie from the 80s. And sure, let the critics speak out loud; it's linear and the SCI parser won't be everyone's cup of tea. Not to mention Sierra's infamous save/restore system, but for those who know how to handle the mechanics, you might just be presented with the best Police Quest from the series. I certainly enjoyed it many years ago and I still do today. So, don't do something criminal like passing up PQ2. Instead, polish up your badge, put on some Ray-Bans and get ready to protect and serve!

There is also a version released on the Japanese system called NEC PC-9801, which used redrawn characters in Anime style. Go look it up, kids… 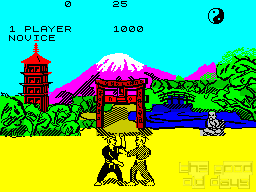