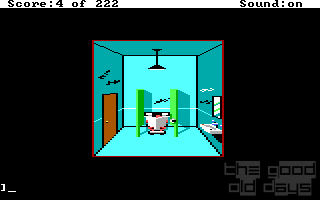 The moment you start up this game, you know you're in for a treat. The cheesy music, accompanied with two-and-a-half colours active on screen and an intro featuring a dork in a white tuxedo, chasing what appears to be, a blow-up doll. Yes, welcome in the Land of the Lounge Lizards.

This game is actually one of the older gems of Sierra and was published in the year 1987. It’s loosely based upon the 1981's game Softporn Adventure (displaying skimpy dressed Sierra employees on its cover!). It also uses the oh so lovely “Adventure Game Interpreter” (AGI). And although it's very simplistic for the here and now, back in the days it felt amazing to move your character around and let him do stuff by typing the appropriate commands. In the meantime, there have also been two remakes. The 1991 VGA version and Leisure Suit Larry: Reloaded from 2013. But do yourself a favor and just skip those. Go for the original experience and don't settle for anything less, even if the original doesn't look like much for current standards.

But don’t be fooled by looks, because underneath it’s old age and the grubby appearance, there lies a true golden oldie. It’s much like having a dirty old neighbour, cracking all these rude jokes. Not shy of delivering sexist and racist puns and begging for you to play with him. Well maybe that's a terrible comparison, but at least it's in line with the typical humour displayed in the Leisure Suit Larry games. And although most jokes may be poor, they still managed to make me crack a smile.

The plot of the game is basically about helping the anti-hero (although giant loser would be more fitting) finding true love while losing his virginity along the way. You start out in the fictional city of Lost Wages at a bar called Lefty’s. A true disreputable, shabby and dirty bar, but more importantly, the place to be around happy hour! From there you can visit several other locations by taxi, like the casino, a disco and a convenience store. Other scenes can be covered by foot, like the alley side of Lefty’s and the wedding chapel. The majority of the puzzles, revolve around meeting and attempting to pick up hot chicks. Inside that main goal, also lies the core of the puzzles. While moving Larry around and using typed commands, you progress through the story. Don’t expect any elaborate challenges, but puzzles like, getting a rose and giving it to a girl, give whiskey to a person to receive something else.

LSL1 also has a great side-game which you can find in the casino. There are slots to play with, but the best part is the game of blackjack. It’s also integrated in the game to keep your funds up high enough to buy the required items. Just like the real-life, you need to win at the casino before you can purchase those ribbed and strawberry flavoured condoms. And if you make the mistake of playing this game at an age too young, LSL1 will teach you some valuable life lessons. It taught me for example how condoms work and even how to inflate a blow-up doll. It also made me believe for years that practicing unsafe sex would end up with my genitals flashing all the colours of the rainbow before dropping dead. Who says you need Sex-Ed when you got Leisure Suit Larry growing up!

If you haven’t guessed so by now, this really is a game for adults. The game features all sorts of adult subjects like, pimps and hookers, drunk hobo's, violence, bondage and perhaps the worst of all: a ceremony in which two people are united in matrimony. The horror...

With that theme, Al Lowe (the original brain behind Larry) really left his footprint in the gaming industry with this first edition of the Leisure Suit Larry series. Still now, LSL1 is considered a classic. The original big boxes are worth around a hundred dollars and I’m still eager to find one for my personal collection. It also had several successful successors, especially the two sequels of this first game, honour the series in my opinion.

The bottom line is, if you're allergic to internal speaker sound effects, graphics from the stone-age and Sierra’s infamous death-restore/restart system, you'd better be off and skip this one. But, if you're into cheesy humour, happen to have a weak spot for old adventure games AND you're not easily offended, this is certainly a game worth checking out. Also, if you're an equally big fan like myself, perhaps we can meet up one day. Just make sure you put on your best looking white polyester leisure suit and be prepared to whistle that famous Larry tune.

While you're at it, do yourself a favour and check out LSL2 and LSL3 for an entertaining trilogy. 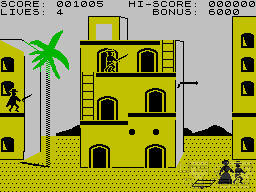