Leisure Suit Larry 6: Shape Up or Slip Out!
for PC (VGA) 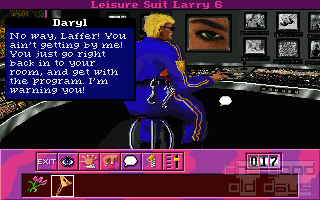 Congratulations, you have lost! Yes, that's exactly how you start this brand new adventure, Larry. You were invited to the “Stallions” TV contest show, where you were hardly a “stallion” anyway, still you have surpassed all expectations and once again successfully retained your title as unparalleled buffoon! But dig this, pal, by losing so adorably you get yourself a free ticket to vacation you would never afford under ordinary circumstances, which is a part of the contract you weren't aware of in the first place! “Ya ain't gettin' away now, lovuhboy!” – whispered your mischievous fortune...

...- “'cuz you gonna spend two weeks in dis fine glamorous nest called La Costa Lotta which is an expensive health spa, whose dwellers are sizzlin' hot women just waitin' to shag the livin' daylights outta ya!”, “Don't you bet on it, loser!” – suddenly went another voice. “Wh.. who's there?!” – you cried out into pitch black darkness, – “Is that you, Al?”. But there was no reply. And so you bravely stepped forward into the dark, towards a brand new adventure, with a brand new portion of stunning women, romance, champagne… teasing… scoffing… losing… in other words, you're back in business, buddy!

Now wait a minute. Back from where or what exactly? Technically speaking, LSL6 is really part 5 of the series since 4th in fact never existed, which is commonly treated as The Missing Floppies conundrum, and even though this is a follow-up to Leisure Suit Larry 5: Passionate Patti Does a Little Undercover Work, there was detected no connection whatsoever with regard to the storyline carried on by chapter 5, and this time Larry springs literally out of nowhere, which suggests the authors may have considered putting a period in his awesome career at some point. Anyhow, as far as the tradition goes, our hero would normally end up hooked with one or another female prize at the grand finale of each chapter, but this time he's a little left out. No Patti, no nothing. Something tells me instead of making 4th installment non-existent it would've been wiser to make it 6th, since 3rd and 5th are seemingly better connected and therefore are more consistent with each other, but… we won't be calling Al Lowe out on that or whoever is responsible for this bad joke, as it by no means reduces the quality of the games. Speaking of jokes though, the above makes me think it was really a setback in franchise disguised as a harmless escapade to avoid unwanted rumors. I guess that's why it's still under question whether it's one or another case. Anyway.

As usual, in the best traditions of Al Lowe, this Larry game is seasoned with healthy shots of sarcasm, naughty double talk, sly insinuations and cruel twists, which is the hallmark of the entire Leisure Suit Larry series, that to the large extent defined its undeniable success. However, let's not forget about fabulous grotesque'ish graphics (VGA specifically), which, unfortunately wasn't implemented for every game in the series, probably due to small budget at the time when remakes of old SCI/EGA games were still in great demand or perhaps they didn't conceptually fit into new gaming model. Of course, it's not a single case in history of Sierra adventures, and there is a handful of un-remade games that were left as is for reasons unknown. I guess the developers mostly agreed on that EGA is still wanted in, say, 1993, which isn't at all far-fetched I reckon. Besides, older SCI engine offered its own conception of what the game control method should be, which was and probably still is a matter of personal preference. With the point'n'click revolution there was detected a mild wave of negative feedback, some people were unhappy with this innovation since it apparently made the games a little too manageable and therefore less exciting. However, our present game here was never remade and it saw the light as point'n'click edition straight out of the box, so we'll just have to admit it rocks as we know it.

LSL6 is roughly identical to LSL1 and LSL5 gameplay-wise, and it more stems from the latter in terms of graphics since at least the character sprites used in it were apparently imported into the follow-up. The environment has been vastly improved though. This time you have a lot more space to explore (and I only refer to VGA lineage), which includes your personal room and quite civilized too (there is even bathroom with a working toilet which is perfectly safe to use! Finally, goddammit!), swimming pool, bar, gym, liposuction room (yikes!), kitchen, mud bathhouse, beach and penthouse, which is where Larry is traditionally to find his true love, although it's got a bit old. As usual, you can't satisfy one female without having pleased another, as the latter often holds a key to solution of another puzzle, and each successful completion of the task would often be followed by some unpleasant twist or a rather humiliating procedure (often painful too), which in this game have reached a dirty climax. For instance, how do you feel about getting your guts a little cleaned of… ahem… caca, or having sex with a tranny? LSL6 is full of wild and vicious gags, but that's what makes up the whole fun and shows a real progress since LSL5. Incidentally, it also outscores LSL7, where the latter seems like a cheap remake of LSL6, only with “better” graphical approach, which from my perspective don't contribute anything to fun factor at all and is more of a pseudo-novelty. Let's face it, Leisure Suit Larry is really done with by chapter 6 of the series and is probably the best one in it, as is likewise one of the best Sierra titles, in my humble opinion. To conclude this chunk of text, here is a brief and semi-useful list of new features that came along with this installment:


It would always strike me as to how sad and true in fact some of the degrading upshots are in every Al Lowe game, which is indicative of his amazing insight with regard to the human psychology and social relations. You may get an impression he's not very much fond of humanity in general and is a terminal pessimist, notwithstanding his unusually high spirits. Quite controversial, isn't it? Perhaps it's the fact that he sees through the superficial garments of the supposed-to-be successful modern society as opposed to the majority of ignorant masses, which has kept him floating above this vanity fair and rendered him immune to mundane sorrows? Or maybe it's just a devilish grimace, malicious joy and gloating delight that humans suck so miserably while being presumptuous fools and conceited hypocrites, so it's actually entertaining to see them wallow and wriggle in this dirty cesspool like pathetic worms, how they abuse, exploit and devour each other in a great fascinating variety of ways? Whatever it is, he displays it ever so vividly and without a shade of compromise, if only a little comical and exaggerated for such purpose: morbid fetishes, identity crisis, consumerism, overbearing females and in the center of it all a little guy, an utterly backward “beta” male figure in contrast to “real men”, who's in the vice grips (pun definitely intended!) of this wicked abode, plagued, as it were, by contemporary ghouls, vampires and werewolves. It's all here, underneath this bland, palatable exterior. In that particular sense this game is a grand masterpiece, and Al Lowe is anything but a simple mind, folks. He's a freaking genius! And tell you what, give Freud a break and play this instead. I dare you. I double dare you!

Moebius:
Well, seems like you understand me well then

I played it when i was still at school kinda, although my last years, and it was very similar to your experience. That's why this game has a special place in my heart...

Those romantic sleepless nights spent while playing adventure games...
Herr M.:
Ah LSL6, a guilty pleasure of mine. I actually played it only once, but it was one of the best times of my gaming life. It was back in the days when I just had finished school, my parents where on a vacation, I was alone at home and this was one of the games that was part of a bundle, from which I had played almost all of the other titles, but this one I was kind of ashamed to start up. I guess you could say that it is a very juvenile game, that I could have spend this week in a more productive way, but I regret nothing.

It was like taking a vacation myself, doing lots of the usual stupid stuff, minus having to live with the consequences. And in the end it's a lot like playing one of those ultragory FPS games: It's utterly tasteless and most people will be awful quick to judge you for doing it, but that's actually part of the charm.

Moebius:
Feel free to share anything about Leisure Suit Larry 6: Shape Up or Slip Out! (1993) here!
[Reply] 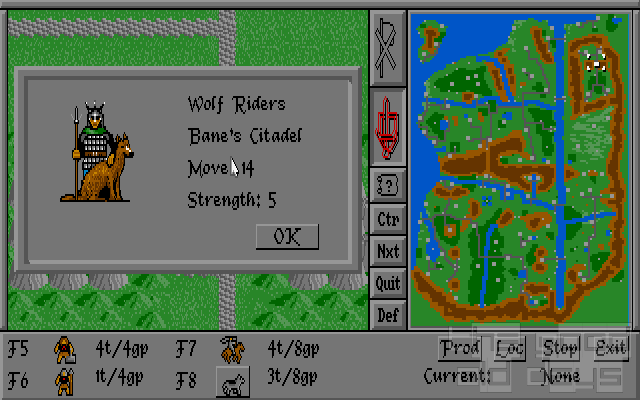