Seas of Blood
for ZX Spectrum
Also available for: Gamebook 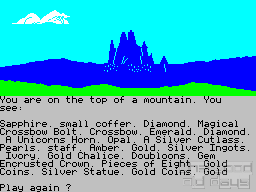 Two notorious swashbucklers hold a contest to see who is the most ruthless one. Whoever brings most loot to Nippur, the city located at the other end of the sea, by an agreed day wins. You and your Banshee of course want to win.

Unlike the earlier computer ports of some Fighting Fantasy books which opted for a direct translation not only of the contents, but also (more or less) gameplay style, Seas of Blood is a much more traditional parser-based text adventure (with static illustrations). And it even goes beyond the original book in some respects. 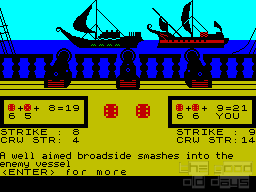 The book's specialty is that loot can be generated on two levels: by crew action and individual adventuring. This principle is also applied in the computer game. Naval encounters lead to battles which are then resolved with simulated dice. However, this is the only such aspect. The complete rest of the game takes place with only the protagonist on his own; even if the crew can sometimes be taken along, they cannot be “used” on land.

So apart from these encounters with other ships, the sailing part only serves as transportation between one mini-solo-adventure and the next one. Unlike the original, it allows the player to sail his ship freely around the game world, going back and forth as often as he likes. The only limit is the agreed time of the contest, so careful planning, of course, is an advantage. 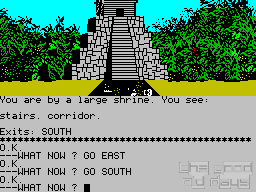 The places where you can land can be cities or other places. Some don't actually contain anything useful – a good way of simulating that the captain may just have made a bad decision where to go. Other places hide their treasures pretty well and there are deadly dangers lurking everywhere (including some one-on-one combat book-style again). Like in the book, encounters of the supernatural kind have to be expected.

Most of these episodes have been adapted from the book, but rather in spirit than by letter. There is a similar temple to explore, with similar corridors and alcoves; there is a similar settlement to raid; there are similar encounters with mythological giant birds and snow creatures; but there are also always subtle or even fundamental differences. This enables to have more sensible game design with respect to this different medium, but it weakens the link with the source material nevertheless.

The episodic nature of the game at least makes it not too complex and hard. For its time, it could be considered as a relatively easy one. So even if it's not the book, it is a nice re-imagination of the theme as well as a good game on its own right. 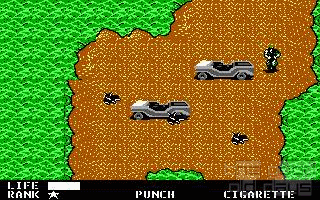