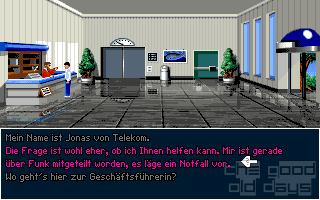 The second Telekommando game basically has nothing in common with its predecessor; rather, it is just the second promotional game made for the Deutsche Telekom. The player is put into the shoes of a technician of the Telekom who is sent to take care of a service disturbance in a large office building. It has been completely cut off from the rest of the world. Neither the BTX works, nor faxing, satellite connections of anything else. Scouting the building, the player realizes that an evil organisation called S.T.Ö.R. (= “disturb”) has established headquarters on the third floor and they have sealed off the whole floor. So it is now up to the valiant hero of the Telekom to put a stop to their game – and to demonstrate everything he has learned during his apprenticeship at the Telekom.

And “Ron Sommer” said: “Let's pretend to be cool. It'll look as if we actually care for our customers and as if we were a young and modern company.” And his disciples went into the wide world to spread his word. One came back with something he called a 'computer game'. And “Ron Sommer” saw it was good. Or at least he thought it was good...

Ok, I confess this story is a lie. The “guy” who calls himself “Ron Sommer” wasn't even the German Telekom's (the phone company previously owned by the state) boss back when this game was released. But if the Telekom is allowed to spread such blatant lies in their game, so can I!

The first lie already causes a big grin on the player's face in the intro: “[...]reacts immediately and calls the Telekom. Shortly thereafter, a white service van arrives.” Yeah, right. As if this bureaucratic 'company' ever reacted to an emergency call within less than two weeks (if at all)!

And it continues in that style. The game suggests the Telekom-people are genius allrounders who can not only repair really everything, but they actually do it without being asked for! “Oh, your lift is not working? No problem, I've been called to repair your phone lines, but I can quickly do this, too. For free of course.” Every German will have tears in his / her eyes of laughing out loud! 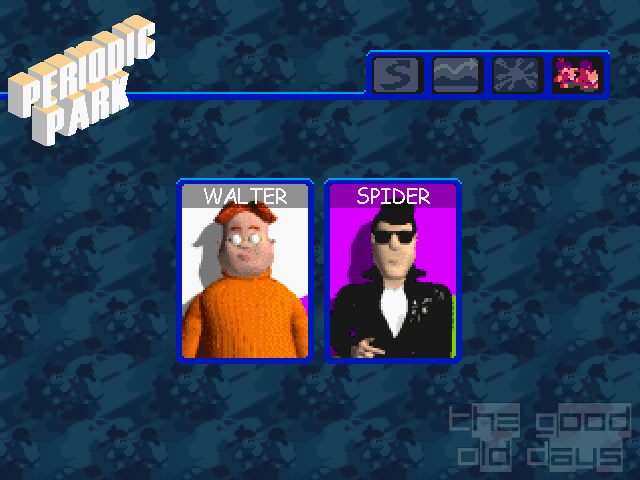