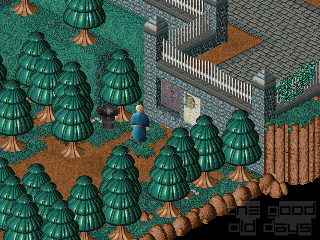 Little Big Adventure is probably a typical game of the widely spread 'action-adventure' genre. First a story which carries the game to satisfy the adventure part: The inhabitants of the fictional planet Twinsun suffer from the terror regime of the tyrant FunFrock. He has the power to produce clones which control and suppress the people with Big-Brother-like methods. One of the victims is Twinsen, who is in search for a magical legend of the planet to overthrow FunFrock and liberate the poor people. This rebel rolemodel is up to the player so he can fully live up to his insurgence phantasies. For complete disaster Twinsens wife gets kidnapped which brings up even more urge for revenge and activates protective instincts.

All these goals are far away and thus Twinsen has to travel across the whole planet to meet helpful individuals and expand his magical skills. For that he can select one of 4 extremely practical 'moods' by pushing a button: 'normal', 'athletic', 'aggressive' and 'sneaky'. They enable him to act variably according to the respective situation. The fat guard gets beaten up without further ado (aggressive) whereas you better sneak by the mighty tank (sneaky). Furthermore there's a magical ball which can be used as a ranged weapon. During the course of the game these skills are expanded by the growing inventory.

The type of skills shows how much the action part is dominating. Mostly the puzzles are solved by having a special item and giving it to a certain person which surprisingly helps you getting further along. There's nothing to say against it but better not expect complex and brain twisting riddles. Nevertheless the game is not to be taken too lightly because quite often a lot of skill is necessary to get on - most of the ever present guards can only be overcome by violence. At other locations precise running and jumping is required.

The isometric perspective adds a lot to playability but sometimes it makes exact aiming and moving harder. The controls on the other hand leave nothing left to wish. They are comfortable and fully accessible via keyboard. A nuisance is saving: every time the player enters a new area (for example a house), the game is saved automatically. The problem is that even in case of being arrested the previous savegame gets overwritten and you have to play on in the prison. Even copying the savegame doesn't really help here.

But even with this weakpoint the positive impressions clearly have the upper hand. Many different surroundings due to the type of the planet and lots of content provide longlasting fun. The combination of the openess of an adventure and the advantages of an action game is successfully applied here.

Wandrell:
The only style similar to a playmobil doll that I can think of is the Ultima 7 style. The arms, legs and torso were like pieces joined. And the rushed Ultima 8 had a more plastic look but also lookes similar.
Mr Creosote:
Ecstatica's graphics are built from ellipsoids instead of vectors. That's a completely different approach and looks rather silly in my opinion. What I'm looking for is the 'Playmobil' style of LBA.
Mr Creosote:
Very interesting graphical style - why wasn't this used more often? I never had the patience to finish the second part, though.
[Reply] 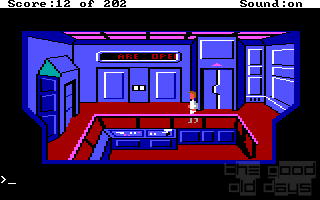